Petronas to cut spending by RM15bn-20bn

■ Petronas plans to cut 2016 capex and opex by RM15bn-RM20bn.
■ Cuts include revisions and renegotiations of some contracts.
■ Maintain Neutral on the sector, with Bumi Armada, Uzma and Dialog as top picks. 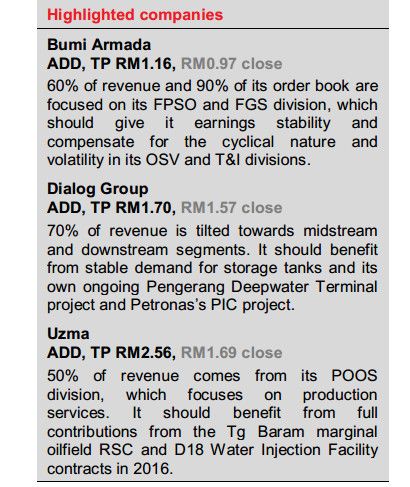 ● Petroliam Nasional Bhd (Petronas) plans to reduce its capital expenditure (capex) and operational expenditure (opex) for 2016 by between RM15bn and RM20bn due to the low crude oil prices. Its president and CEO Datuk Wan Zulkiflee Wan Ariffin said the reduction would be part of the national oil company’s move to reduce the capex and opex by RM50bn over the next four years.

Cuts include revision and negotiation of contracts
● Potential cuts include revisions of contracts, such as risk-sharing contracts (RSCs) and enhanced oil recovery (EOR) contracts, and will also impact Petronas’s second floating liquefied natural gas unit (PFLNG2). Petronas has decided to re-phase the PFLNG2 project, to be commissioned at a later-than-originally-planned date.

The news is not a total surprise
● We are not totally surprised by the news. The cuts are not unexpected as the low oil price means that some of Petronas’s projects will no longer be feasible. The cuts also mean that Petronas’s capex will be kept at around RM300bn over the next five years. It is clear that the slowdown in exploration activities in the industry has led to a slowdown in the activities within the development stage of the upstream segment of the industry value chain.

Potential impact on RSCs
● While we expect the deferment of the PFLNG2 project to not have a substantial impact on local oil & gas service providers, the potential revision and renegotiation of RSCs will have an adverse impact on those with RSC exposure. To recap, Petronas awarded in total six RSC contracts from 2011 to 2014, with one aborted earlier this year.

Be selective in stock-picking
● We believe that there are still companies within the industry that should still do relatively better compared to their peers in the challenging industry environment. Maintain Neutral on the sector. Our top picks are Bumi Armada for upstream big caps, Uzma for upstream small caps and Dialog for downstream.