Aggregate adjusted earnings of FBM KLCI stocks may grow +0.6%qoq and +6.7%yoy. For the quarter ended December 2015, the aggregate reported earnings of FBM KLCI current constituents is estimated at RM15.62b. Against the combined RM11.77b earnings reported in preceding quarter, it is expected to record a massive sequential growth of +24.3%qoq in 4QCY15. Nevertheless, adjusted for extraordinary and non-recurring items, the on-quarter growth may be mutedly higher at +0.6%qoq. On the other hand, the on-year reported growth figure in 4QCY15 is estimated to inch up by +0.2%yoy. However, the adjusted on-year growth number may pose a decent +6.7%yoy, which is also an improvement over the +3.9%yoy adjusted growth performance of the prior quarter. 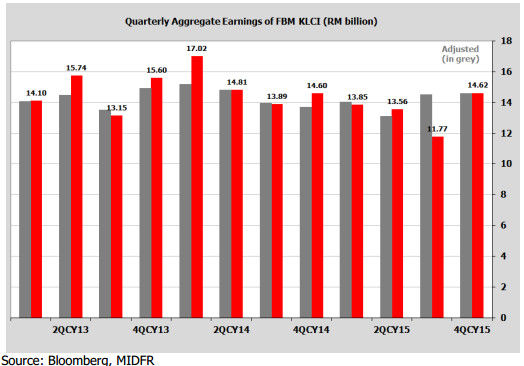 Positive adjusted growth performance among major sectors, except Oil & Gas. Among the FBM KLCI’s Big 5 sectors, i.e. Banking, Utility, Telecommunication, Oil & Gas and Plantation, we are anticipating all around positive earnings growth performance except for Oil & Gas. The aggregate adjusted earnings of Oil & Gas constituents are expected to report slight negative on-year earnings growth and sizable sequential growth contraction partly attributable to higher petrochemical assets utilization as well as a spike in product prices during the prior quarter.

• Banking. We expect earnings growth of banks in 4QCY15 to be subdued on sequential basis. This is due to: i) persistent NIM pressure contributed by higher funding cost as seen by the rise in the 3 month KLIBOR in the quarter ended 4QCY15, (ii) uninspiring NOII due to market volatility which is expected to impact banks’ income from treasury and IB’s markets business, and iii) credit charge-off that is likely to remain high due to asset quality weakness and lower recoveries. Our top pick is Maybank (TP: RM9.80) for its lower Base Rate which reflects a competitive advantage compared to peers on cost of funds, diversified earnings and attractive dividend yield. We have recently upgraded our calls for both CIMB and BIMB to TRADING BUY from NEUTRAL with a TP of RM4.80
and RM4.22 respectively on valuation grounds.
• Utility. The sequential earnings growth is largely driven by: (1) Higher coal in the overall generation mix as several major coal powered plants that experienced outages in the prior two quarters were back on-stream, (2) Lower outright coal price and lower LNG uptake. On-year earnings growth is driven by exceptionally strong demand this quarter from almost all segments, i.e. commercial, industrial, consumer. We maintain our BUY call on TNB with a TP of RM15.60.
• Telecommunication. There is a consequential risk to the forward growth performance of telecommunication players mainly premised on heightened competition among the mobile operators. New plan packages are being launched at more competitive rates and much faster pace. This will lead to further erosion in average revenue per user (ARPU). Apart from this, higher sales and marketing costs may also be incurred in view of stronger acquisition activities. Moreover, profit margin may be depressed by higher IDD traffic cost as a result of stronger USD. We do not think the competitive and fast-evolving operating landscape will improve anytime soon. That being said, widening the coverage area of 4G LTE as well as introducing more value added services would be some of the key determinant factors to remain competitive in the industry.
• Oil & Gas. On aggregate, we are expecting the O&G constituent stocks to register some decline in earnings in 4QCY15 compared with the previous sequential quarter. Petronas Chemicals’ 3QCY15 earnings grew the most both year-on-year and quarter-on-quarter due to the exceptionally good plant utilisation rate of 88%. However, we are not expecting this trend to persist in 4Q15 as there could be some product selling price weaknesses in 4Q15 due to the holiday season. Petronas Dagangan however, could also post slightly lower results in 4Q15 as the results in 3Q15 were positively impacted by aggressive cost control initiatives. Petronas Gas is still expected to post commendable growth in the final quarter of 2015 as the demand for gas is still resilient. As for the only O&G service provider listed on Bursa, SapuraKencana could post a decline in headline earnings as there could potentially be additional provisions – cash flow however is still expected to remain storng. Despite the challenging environment, we are still bullish on SapuraKencana (BUY, TP: RM2.72) due to its diversified business offerings and strong orderbook of RM23b.
• Plantation. 4QCY15 average CPO price of RM2160/MT was higher by 5%qoq hence is likely to result in better earnings for plantation companies. Although production declined 13%qoq, the sensitivity of earnings to CPO price is usually higher than FFB production. Among the four big cap plantation companies, we believe that IOICORP earnings should outperform other peers due to its 100% pure exposure to palm oil business. This is compared against KLK’s 85% contribution from palm oil business, SIME’s 40% and PPB’s effective contribution of only 15%. We maintain our BUY call on IOICORP with TP of RM4.95.

Lesser disappointment ahead? We reaffirm our belief that an improvement in earnings sentiment could be an enduring catalyst for the equity market going forward. On this score, the ongoing reporting season up until now seems pointing towards lesser earnings disappointment ahead. This may be partly attributable to the already lowered expectation hurdle. Recall that in 3QCY15 there were 8 earnings underperformers against 5 outperformers among FBM KLCI constituents (2QCY15: 9 underperformers, 4 outperformers). While it may be too early to tell, the ongoing 4QCY15 season might fare comparatively better as there are only 2 underperformers against 4 outperformers thus far
out of 8 earnings results released.

Reiterate FBM KLCI year-end 2016 target at 1,800 points. We restate our assertion that empirical observations between earnings and price are conclusive with regard to the nature of their secular direct relationship. This is despite the ever present ‘noises’ from short-term price volatility which is influenced by market sentiment and other situational issues. Against the backdrop of possible recovery in earnings sentiment, we reiterate our 2016 FBM KLCI target at 1,800 points. The baseline target equates to PER16 of 16.3x and +0.7SD.