As telcos compete for a share of shrinking wallets, 2015 service revenue contracted 1% yoy to RM21.2b. Together with elevated cost structure, 2015 sector earnings fell 6% yoy. Amid the pedestrian earnings outlook for 2016, lofty valuations and earnings headwinds due to the recent spectrum reallocation, we downgrade the sector to UNDERWEIGHT. TM is expensive while its convergence undertakings may impede near-term profitability and limit dividend flow. 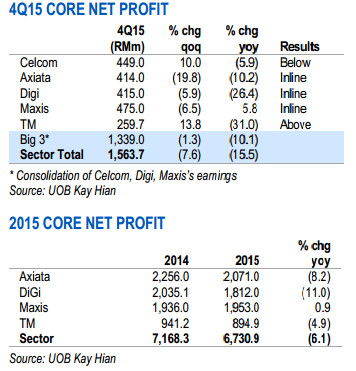 WHAT’S NEW
• 4Q15 core earnings net profit fell 16% yoy to RM1.6b. 4Q15 earnings of telcos came in within expectations with the exception of Celcom, which missed our expectations by 7% due to weaker-than-expected prepaid contribution (losing 260,000 prepaid subscribers sequentially). The Big 3 telcos - Celcom, Digi and Maxis continued to face an upward task in 4Q15 with service revenue contracting 2.7% yoy amid competitive landscape. Together with expensive customer acquisition exercise (elevated marketing expenses) and higher direct costs (weak ringgit vs the US dollar), their combined 4Q15 core net profit fell 10.1% yoy to RM1.3b. TM however, chalked up 13.8% sequential
growth on higher managed service income. That said, P1’s losses widened due to lower revenue base and accelerated depreciation.
• Industry service revenue contracted 1% yoy in 2015… As telcos competed aggressively for a share of consumers shrinking wallets, 2015 service revenue contracted 0.8% yoy to RM21.2b for the Big 3 telcos (2014: -0.8% yoy). Maxis’ large postpaid base (which resulted in a certain extent of customer stickiness), upselling efforts and aggressive prepaid customer acquisition led to a commendable 3.3% yoy service revenue growth in 2015. Digi maintained service revenue at 2014’s level whilst Celcom experienced a 6.8% yoy decline in service revenue for 2015. In all, the sector was plagued by: a) lost revenue due to dealer confusion following the implementation of GST in Apr 15, and b) lost opportunity in pricing basis internet access due to competition.
• …and 2015 EBITDA margins fell by 0.3ppt to 48.7%. Normalised 2015 EBITDA margin (to service revenue) fell 0.3ppt to 48.7% for the Big 3 telcos, mainly dragged down by Digi (-3ppt) as a result of heightened competition within the prepaid segment and higher direct cost. Maxis’s EBITDA margin rose 1.6ppt thanks to the successful upselling of MaxisONE Plan.

ACTION
• Downgrade to UNDERWEIGHT as we see emerging earnings headwinds given: a) weak consumer sentiment amid inflationary pressure, b) highly competitive landscape, c) elevated capex due to spectrum reallocation, d) upfront fee levied by regulator for spectrum holding, and e) lofty valuations despite the pedestrian earnings outlook. The sector currently trades at 24.4x 2016F PE and 10.7x 2016F EV/EBITDA. We are cautious on TM due to: a) lofty valuations, b) longer-than-expected synergistic integration of P1, and c) limited scope for dividend upside due to higher capex required for the roll-out of wireless connectivity. In all, we expect near-term earnings to remain uninspiring as TM embarks on its convergence journey.

ESSENTIALS
• Trimmed 2016 earnings by 4% post results. Post 4Q15 results, we have reduced our sector net profit forecasts for 2016 and 2017 by 4% and 5% respectively. In all, we expect flattish earnings in 2016 (2015: -5.7% yoy) on the back of: a) pedestrian 1% yoy mobile service revenue growth, b) expensive customer acquisition cost to be partly offset by infrastructure cost sharing and economies of scale, and c) P1’s losses dragging down TM’s 2016 earnings base by a further 3.5% yoy.
• Dimmed outlook. Our recent meetings suggest a rather mixed outlook for 2016. On one hand, telcos are encouraged by the inherent opportunities in data proliferation and upselling efforts. This suggests that network capex will remain a priority in the near term as a superior network can help lower churn rate and eventually grow top-line via successful data monetisation. That said, we also sense that telcos are wary of rising inflationary pressure and broadly, weak consumer sentiments.
• Sector has underperformed ytd….The sector fell 5.7% vs the KLCI’s 0.2% ytd gain. This is due largely to the negative news regarding the 900MHz and 1800MHz spectrum reallocation (with Maxis and Celcom being the clear losers) and potentially hefty upfront spectrum fee to be imposed by the regulator MCMC.
• …due to the risk of hefty spectrum fees, which appears to have been priced in. We estimate that the upfront spectrum fee may amount to approximately RM4b (or 2-3% of current market capitalisation) and is likely to be frontloaded in terms of cashflow. We believe the risk has been partly priced in given ytd share price retracement.
• Digi guiding for sustainable dividend, independent of capex outlook. We came away from a recent meeting more assured Digi’s dividend sustainability. Digi boosts a strong balance sheet (net debt-to-EBITDA of 0.4x, lower than industry average) and more importantly, we gathered that Digi’s dividend policy is independent of capex outlook, including potentially hefty upfront spectrum fee. Assuming Digi finances RM1b for its new spectrum holdings, net debt-to-EBITDA will rise to 0.8x in 2016, below Axiata (1.5x) and Maxis (1.8x).

RISKS
• Headwinds in 1H16. The following headwinds, we opine, may impede near-term sector profitability: a) 2016 prepaid GST rebate likely to be shared between the government and telcos, b) aggressive data pricing significantly driving down data revenue amid inflated cost environment, and c) threat of a fourth mobile operator as TM gears up to launch its wireless product via P1 by 1H16.