Sector will likely continue to grow. We maintain our positive outlook stance on the construction sector largely in view of the reaffirmation of ongoing and planned execution of government programs and policies in Budget 2016.

Higher development budget met expectation. The total value of government’s development budget for 2016 announced at RM52bn with sizable allotments toward rural development and urban public transport initiatives, which are two of the National Key Result Areas (NKRAs) under the GTP. This is necessary in order to complete the GTP3.0 which runs from 2015-2020. 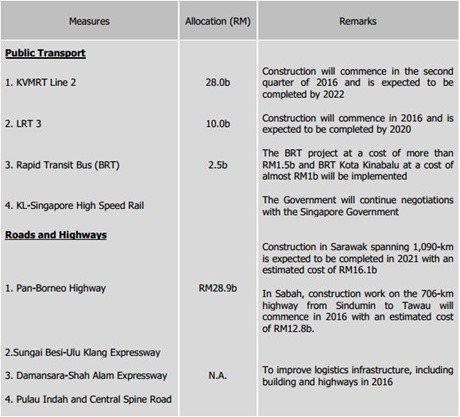 Maintain POSITIVE. We maintain positive on the sector due to positive underlying dynamics based on (i) the current on-going and planned roll out of various government projects, (ii) attractive average sectoral ROE of 15% compared to average of 11.4% for the market benchmark, (iii) relatively inexpensive valuation with average PER of 11.54x, and (iv) growing awarded projects year-on-year. Among the stocks under our coverage that will benefit from the Budget are as follow: Muhibbah (BUY; TP: RM2.95), IJM (Neutral; TP: RM3.56), SunCon (BUY; TP: RM1.32) and Gamuda (BUY; TP: RM4.83).
MIDF Research
← Previous Next →