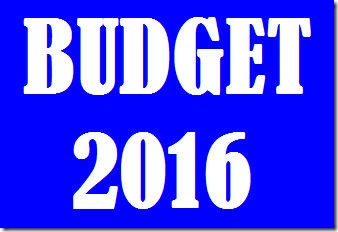 GeneralModest 1.4% rise in government revenue (mainly boosted by an additional RM12b contribution from the implementation of GST), flattish operating expenditure (+0.9% yoy), but a ramp up net development expenditure (+6.1% yoy to RM49.2b) Spending on subsidies will be trimmed to RM26.1b (-0.5%)Fiscal deficit to fall to 3.1% in 2016.

BankingAs largely expected, incentives for the banking sector were again directed at further enhancing the Islamic Financial sector. This includes: a) the extension of the 20% stamp duty exemption on Shariah-compliant mortgage loans implemented since 2006 and b) tax deduction on issuance costs of Sustainable and Responsible Investments sukuk. On another note, Bank Negara Malaysia has
also allowed local banks to operate RM-Renminbi credit swap facilities.
Stock Impact: Sector Neutral. Minimal impact as the 20% stamp duty exemption on Islamic property loans has been in place since 2006. The expansion of RM-Renminbi credit swap facilities will help increase renminbi liquidity domestically which is a natural progression as China is Malaysia’s largest trading partner. This should help improve trade financing growth with Maybank being the current market leader in trade financing among Malaysian banks
ConstructionThe key new projects that were introduced were: a) the construction of two new Bus Rapid Transit (BRT) Lines for a total cost of RM2.5b - one of the lines would be in Kota Kinabalu, b) a RM1.4b allocation to upgrade 700km of rural roads nationwide and c) the construction of 5 new hospitals in Pasir Gudang, Kemaman, Pendang, Maran and Cyberjaya. Also, a sum of RM730m is provided for the Flood Mitigation Project nationwide.
Stock Impact: Construction companies, particularly Sunway Construction, IJM Corporation, Gamuda, WCT Holdings, Mitrajaya, MRCB, Gadang, George Kent.
East Malaysia: Pan Borneo Highway (Sarawak stretch) spanning 1,090km would be completed in 2021 with an estimated cost of RM16.1b. The Sabah stretch would commence work in 2016, with an estimated cost of RM12.8b.
Stock Impact:  Construction companies, particularly Cahya Mata Sarawak, Naim Holdings, Hock Seng Lee, Gamuda, IJM Corporation, Sunway Construction, Gamuda, WCT Holdings.

Gloves
Further subsidy rationalisation expected to result in progressive increase in natural gas prices. While we do not expect a prolonged impact to most glove manufacturers earnings as natural gas costs account for about 5-7% of total operating cost, the time lag involved in passing on the additional costs, could see margins weaken in the near term.
The hike in minimum wages can be passed on. With labour costs accounting for approximately 10-13% of total cost of production, the recent increase could result in a 6-7% decline in glove companies’ net profit if glove manufacturers are unable to pass through the additional costs.
Stock Impact: Neutral to mildly negative to glove makers.
Impact of wage hike should be manageable as glove makers would have sufficient time to pass on the additional costs to customers.

HealthcareIncrease in zero-rated list of controlled medicines (an addition of 95 over-the counter brands for the treatment of cancer, diabetes, hypertension and heart disease) from 4,215 to 8,630 brands.
Reclassification of more tax-exempted drugs to zero-rated should reduce the quantum of cost absorption (on drug prescription) by hospital operators.
Stock Impact: Neutral-to-mildly positive impact to KPJ as the new tax-exempted drug list comprises only a small portion of drugs procured.

ManufacturingMinimum wage hike. Among the manufacturing companies under our coverage, only VS Industry and SKP Resources are affected. We estimate earnings impact of approximately RM4.5m (2.7% FY17F net profit) and RM3.5m (2.2% of FY17F net profit) respectively. Both Daibochi and Scientex are not affected as monthly wage paid to their workers are equal or more than the new national minimum wage.
To encourage reinvestments by companies which have exhausted their eligibility to qualify for Reinvestment Allowance (RA), it is proposed a special RA be made available for reinvestments made in a period of 3 years of assessment. "
Stock Impact: Minimum wage hike is Neutral to Daibochi and Scientex. And mildly negative to SKP Resources and VS Industry.
The special RA proposal will benefit manufacturing companies through lower effective tax rates.
Potential winners: Scientex, Daibochi, VS Industry and SKP Resources.

Oil & Gas
Downstream: Investment of RM18b estimated for RAPID complex in 2016
- Upstream: GST relief on reimportation of certain equipment for O&G platform
- Overall: The government expects revenue (which are dividends from Petronas and petroleum taxes from O&G related sectors) to be RM31.7b for 2016. This is a 28% decline from expectations of RM44b in 2015 and a 49% decline from RM62b in 2014. Petronas dividends were RM29b and RM26b in 2014/2015.
Stock Impact: Neutral overall, as already anticipated
Downstream: This is about 20% of the total RM90b allocated for the RAPID complex (RM53b for refinery and petrochemicals; RM36b for associated facilities), to be ready for 2019 start-up. Dialog is the biggest beneficiary; other stocks with exposure include MMHE, Barakah, Wah Seong, Muhibbah Engineering, Pantech, and KNM.

PlantationHigher minimum wages.
Development of the Malaysian Vision Valley
Allocation of RM20m for the development of Palm Oil Jetty in Sandakan, Sabah.
Stock Impact: Mildly negative – raises the cost of production by 3-5%. Positive for Sime Darby to unlock its land value over mid-to-long term. Sime’s 22,454 ha of landbank in Negeri Sembilan is included in the 108,000 ha growth corridor.
Sabah is the largest palm producing states (33% of total production) and the investment in port should be positive to the sector for a better trade flow and to encourage more downstream investment into Sabah.

PowerFurther subsidy rationalisation expected to result in progressive increase in natural gas prices for the power sector.
Stock Impact: Neutral on both offtaker and IPPs. Under the Incentive-based-regulation (IBR), we expet Tenaga to pass on the higher gas cost through a 6-month tariff review.

PropertyRamping of affordable houses with PR1MA leading the initiative. PR1MA is expected to build 175,000 new homes and sold at 20% below market prices, with an allocation of RM1.6b (up from RM1.3b in Budget 2015).
Establishment of First House Deposit Financing Scheme to assist first-time home buyers of affordable homes with an allocation of RM200m.
Development of the RM11b Cyber City Centre in Cyberjaya and the KLIA Aeropolis covering 1,300 acres that is expected to attract an investment of RM7b would also benefit Sunsuria Bhd’s Xiamen University Township development in the future.
Stock Impact: Potential winners: Developers of affordable homes, particularly those priced below RM500,000 in the Klang Valley. Potential winners include: Mah Sing, Glomac, Crescendo, CMS, Matrix Concepts, and MCT Berhad.
Potential beneficiaries: Sunsuria, (note that Malaysia Airports Holdings is also a beneficiary).

Telco
1) Malaysian prepaid users will receive a rebate equivalent to the amount of GST paid, which will be credited directly to their prepaid accounts. This measure will be effective from 1 Jan to 31 Dec 2016.
2) Malaysia Communications and Multimedia Commission (MCMC) will provide RM1.2b, among others, for rural broadband projects which will see a four-fold increase in Internet speed from 5 mbps to 20 mbps, National Fibre Backbone Infrastructure, High-speed Broadband and undersea cable system
Stock Impact: 1) Positive impact for mobile operators on two fronts: a)removing the overhanging uncertainties concerning telco’s ability to pass on GST to prepaid users, and b) may help induce higher business activities (be it voice, SMS or data) for the telcos. Digi (DIGI MK/ BUY/ RM5.63/ Target: RM6.30) stands to benefit the most here given its dominant 37% market share of prepaid revenue as at 1H15.
2) Mildly positive for TM (T MK/ SELL/ RM6.81/ Target: RM6.00), as the Government remains committed to increasing broadband penetration rate in Malaysia.