Budget 2016 would be an expansionary budget. Budget 2016 which comes in the midst of domestic and global economic uncertainty is expected to provide more stimuli particularly in sectors which will provide high multiplier impact and boost social welfare of the country. The budget is expected to achieve this by putting an emphasis in development expenditure while cutting back its operational expenditure through a more prudent spending in parts of the government sector. The budget will become the first budget under 11 th Malaysia Plan and should start to kick-off most of the 11 MP pathways. At the same time, the needs of the  Rakyat will still become one of the main focuses in the budget, particularly through providing targeted subsidies to various categories.

Budget deficit is expected to be maintained at 3.2%. Government’s revenue is expected to be pulled back from the lower contribution of petroleum-related revenue, making it difficult for the government to achieve the initially planned 3.0% budget deficit target. However, the higher revenue received from the introduction of Goods and Services Tax (GST) should be able to cushion most of the shortfall. We would expect the operating expenditure to be cut by approximately 3% to RM211,500 relative to the revised 2015 budget figure through a more prudent spending. Development expenditure is expected to be higher by approximately 5.2% in order to boost the economy amid domestic and global economic uncertainty. The focus of the development expenditure is expected to be in line with 11 MP.

GST revenue is expected to offset reduction from Petroleum-related revenues. GST is estimated to contribute approximately RM30 billion towards government revenue in 2016 based on the 2Q15 GST collection at RM7.6 billion. This is estimated to be higher by RM11.5 billion relative to the potential collection of SST in 2016. There may be more exempted and zero-rated list introduced in Budget 2016 to ensure that the new tax system does not burden the citizens in need particularly in the healthcare sector. 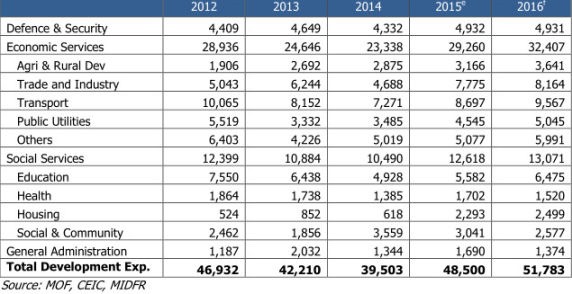 Expect higher development expenditure in 2016. As mentioned by Dato' Seri Ahmad Husni, the 2016 budget will have a larger budget particularly for development expenditure as a kick-off for the 11 MP. At the same time the higher budget is also expected to support the current economic uncertainties and provide a stimulus to boost the economy. We are expecting a higher budget expenditure growth particularly for agricultural and rural development, public utilities, trade and industry and education sector, in line with our 11 MP plan to become a high income economy in 2020 by pushing economic growth through productivity and knowledge while enhancing inclusiveness for all Malaysians.
Economic Development
More incentives for SMEs can be expected. As the government is targeting for SMEs to contribute up to 40% of GDP growth, hence more incentives and investments are needed to further encourage entrepreneurial activities. More loans and incentives for SMEs would be incorporated in the budget, with a special focus on high value add activities.

Special incentives for agropreneurs. As Malaysia’s population is steadily increasing, it is becoming more essential for Malaysia to produce our own food for domestic uses. Agropreneurs which are able to produce more agricultural products with high level of efficiency is expected to become one of the focuses in 2016 budget.
Encourage use of domestic products. In order to further strengthen our domestic economy and improving Malaysia’s current account balance, introducing measures to further encourage use of domestic products may be included in the budget. This will eventually improve the profitability of local economy.

TaxationThere may be no income tax cut. The last budget 2015 had already cut a sizable amount of income tax due to the introduction of GST. Amid the tightening of government revenue due to the lower oil price, an income tax cut may not be considered by the government. Rather the change in income tax may be more on reliefs and rebates for the middle income class.
More GST exemptions could be expected. The government may consider including more goods and services in the GST exempted and zero rated list particularly on food products and medical products and services. This is due to the high number of requests among the public to consider including them into the exempted list. As budget 2016 is expected to consider the voice of the citizens, hence the suggestion may be taken into consideration.
SubsidyThe 1Malaysia People’s Aid (BR1M) will continue to increase next year. As promised by Dato’ Sri Najib since the last few years, BR1M’s handouts will continue to increase gradually every year until it reached RM1,200 for the qualified household. The increment in BR1M’s payment would be applicable to all stages of recipients, with a higher increase for the lowest income bracket. The cash handouts for lowest income bracket household may be increased to RM1,050 from the current RM950.
Housing
All of the currently ongoing housing schemes will continue. The high level of housing price continues to become the woes of the public, particularly for young graduates and married couples. All of the previous schemes targeting specific groups are expected to continue with some adjustments to the criteria. Transit housing programmes for youth and young married couples might also be introduced as planned in 11 MP.
Affordable houses will continue to be developed. The focus to help low and middle income household to own a house is expected to continue to become one of the main keys in the government budget every year. Most of the houses are expected to be built in sub-urban areas particularly around major cities in Malaysia.
Incentives to develop more cost-efficient house by developers. Recently the focus of the government is to encourage more cost-efficient housing by using various models from around the world particularly from Philippines and South Korea. As such, incentives to produce these types of house such as by using IBS technology could be one of the measures introduced in Budget 2016.

Infrastructures
Expansion of fiber optic internet particularly for rural areas. In line with the government’s plan to make Malaysians more internet-savvy, Budget 2016 could incorporate fiber optic expansion to rural areas as one of the key element under its development expenditure. The higher number of internet access would also contribute to higher economic activity as online business activities are growing rapidly nowadays. Enhancing rural-urban linkages via road and railways construction. In line with the 11 MP to balance the geographic growth of Malaysia, the connectivity between urban and rural areas is expected to be improved further via more roads and railways construction. This would boost the population in targeted areas and eventually transform the rural areas by providing more business and employment opportunities. Spending on electricity and clean water supply for rural areas will continue. The rural areas are expected to continue receive special allocations for the development of electricity and clean water supply in the area. This project is a continuation of Budget 2015 and is also one of the key targets in 11MP.

Healthcare
Making healthcare more mobile friendly. Investment in the healthcare is expected to be focused on making it more mobile and flexible, in order to cater the needs of the citizens particularly in rural areas. Besides that, there may be more hospitals to be developed in sub-urban and rural areas.

Public Safety
Investments in trainings and systems to improve efficiency of the current police force. Rather than increasing the amount of the police force which will further tighten the government’s operating expenditure, the government may opt to focus on improving the efficiency of the police force. Participation of the public in ensuring public safety and cooperation with the police is also expected to be addressed as proposed in the 11 MP.
Employment T
Trainings for unemployed graduates will focus on high-skilled areas. In order for Malaysia to achieve a developed nation status in 2020, it is essential to improve the overall skills of our labours to high-skilled areas. Trainings for unemployed graduates are expected to continue, with more emphasis given towards knowledge- intensive and high-skilled areas.
Specialised training for women and disabled persons. As the government would have wanted more participation in the economy, more training are expected to be given to women and disabled persons. Furthermore childcare and maternity incentives may be provided in order to further encourage women participation in the workforce.
Measures to reduce cost of foreign labour. It is inevitable that as Malaysia is aiming to become a high income country, dependency on cheap and low-skilled foreign labours cannot be tolerated. However, reducing the amount of cheap foreign labour during economic uncertainty would be costly to the businesses. As such we are expecting there will be some kind of measures introduced in the budget to tackle the issue of high cost of foreign labour. At the same time, measures to reduce the amount of illegal immigrant workers may also be included in the budget.