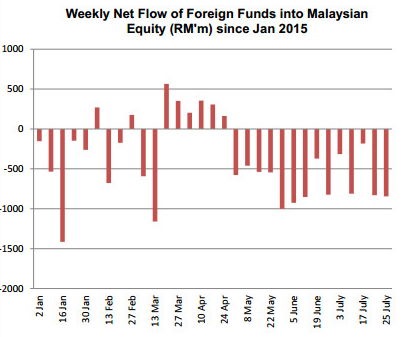 • Foreign money outflow from Bursa-listed companies continued unabated last week.
• Foreign investors have now been net sellers on Bursafor fourteen consecutive weeks, the longest stretch
of back-to-back weekly selldown since the 2008 Financial Crisis. Last week, investors classified as “foreign” sold equity listed in the open market on Bursa (i.e excluding off-market deals) amounted to RM845.0m on a net basis, edging up from RM830.1m the week before.
• Foreign selling was heavy on Monday-Wednesday, with daily net sale exceeding RM200m, but less than RM300m. That made it 26 times that the daily
threshold had been exceeded this year. For the entire 2014, there were 23 days during which net sale surpassed RM200m.
• We note, however, that foreign investors were net buyers on Friday, mopping up RM132m net, the first purchase in 12 trading days. However, it is too early to assume that the trend in money flow is reversing. 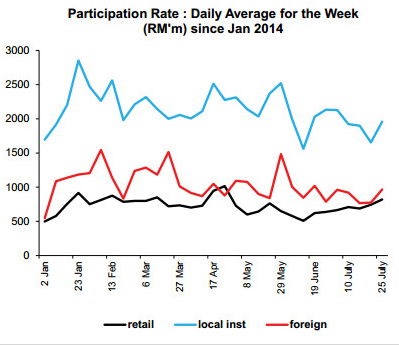 THE WEEK AHEAD
CAUTIOUS AUGUST
• The KLCI and FBM70 indices were down -0.6% and -0.7% respectively in July.
• Trading in the month of August begins on Monday, and history does not seem to be siding with the hopefuls. The average change in the KLCI during the month of August in the last 21 years was -0.9%, the second worst compared with -1.7% in September.
• It is apparent that August is not the friendliest of months for the equity market. We do not think that it is going to be any different in 2015. With China’s market on a dangerous slide, interest rate in the U.S approaching its inflexion point, and emerging market risks on the rise, the equity market is currently not for the faint-hearted.
• It may be the case of how bad the downside will be in August. The price of Brent crude fell more than 2% on Friday alone and was last quoted at USD52.21pb. That is not conducive for the Ringgit and Malaysian equity.The Ringgit in particular may be in the spotlight in view that the currency was relatively more resilient against the greenback, compared with other Asian currencies in the last one month (see chart).
• We note that yields spiked up last week (see charts). The yield on 10-year MGS reverted to >4%, while that of 5-year MGS exceeded 3.6% on Friday. While the overhang of foreign liquidity in the equity market has shrunk significantly, that in the bond market remains high. The spike in yields last week reflects foreign attrition in the bond market, which may cause pressure on the Ringgit in the week ahead. 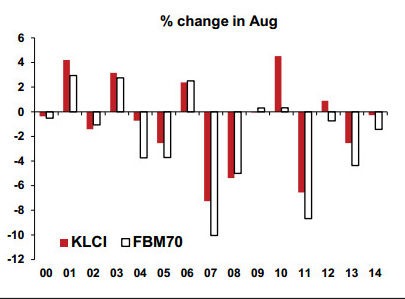 FOCUS TO STAY ON SMALL CAPS
• August will be a tough month for equity but for investments with >6 months horizon, the AugustSeptember period is actually a gainful period to accumulate.
• Meanwhile, for trading activity, we would remain focused on the small caps. As we had predicted, small cap stocks had a decent last week. The FBM Smallcap
index was down -0.9% in a tough market environment but the index remained above its 50-day average and is just shy of breaking the 200-day average. We expect plenty of bargain hunting activity if the market came under selling pressure this week.