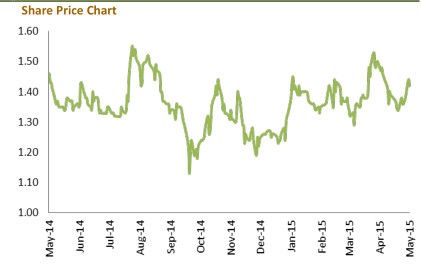 Ho Hup via its 75%-owned subsidiary, Ho Hup Ventures (KK) has entered into a Share Sale Agreement with Agro Padi SB to acquire a 70% stake in a Golden Wave SB (GWSB) for RM30m. The acquisition enables the Group to gain ownership of a 5-acre commercial leasehold land in Kota Kinabalu (KK), Sabah which is positioned to a mixed development project at a potential GDV of RM774m. We are positive on this move as this is a continuation of its effort to replenish its landbank in order to further establish its position in property development besides to sustain its property profits. We revised  our  FY15/16  forecast  by  -14.0%/-6.1% respectively to account for the cost and earnings impact from this acquisition. Nevertheless, our TP increased to RM1.68 (from RM1.60) following the revision in our property valuation. BUY. 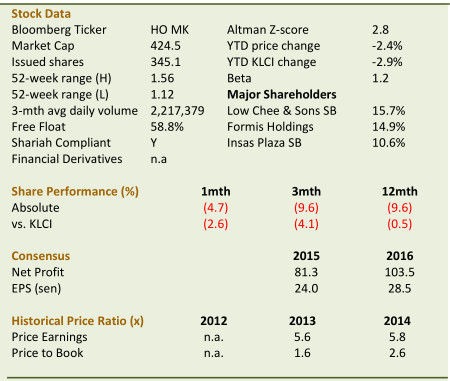 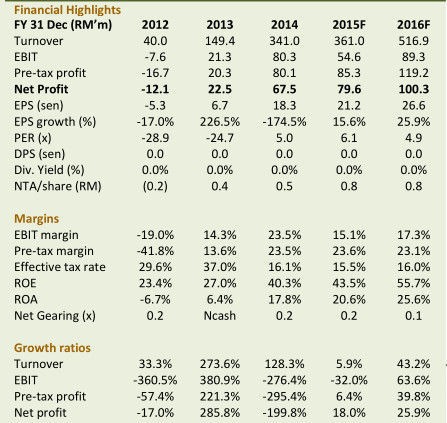 The deal. GWSB is principally involved in property development and management of a shopping mall i.e. City Parade in KK. In May 2010, GWSB signed a JVA with DBKK Holdings SB to construct a bus terminal and car parks at cost not exceeding the agreed land value of RM46.92m in exchange for the adjacent piece of commercial leasehold land. The title of the Land shall be delivered to GWSB upon completion of the Bus Terminal in June 2016 or in favour of DBKK for the immediate transfer. The construction of Bus Terminal has reached a stage of completion of approx. 19% as at April 2015. The land. We think the acquisition is relatively cheap given that KK is paying RM30m for a land with an indicated market value RM185m as appraised by valuer.

The Land is strategically situated in the prime areas and center of KK, surrounded by commercial properties and hotels such as Sutera Harbor, Shangri-La Hotel, Pan Pacific Hotel and the Sutera Golf Course.

Brighter ahead. We gather that the Land is to be developed into integrated service apartments, hotels and commercial development with GDV of RM774m to span until 2020. We are positive on this move as this is a continuation of its effort to replenish its landbank in order to further establish its position in property development besides to sustain its property profits. In view of the promising location, we believe the demand for residential and commercial properties in KK remains favourable among local and foreign buyers.

Earnings forecast. Nonetheless, we revised our FY15/16 forecast lower by 14.0%/6.1% respectively to account the cost and earnings impact after the acquisition. Our adjustment is based on the assumption that the revenue from the property development to only recognize in FY16 onwards whilst cost to construct the bus terminal and car park to impact immediately.

Gearing to increase. Assuming RM20m of the acquisition is financed via bank borrowings, it will increase HoHup’s debt and gearing to RM59.6m and 0.5x respectively (from RM39.6m and 0.3x as of Dec 2014). Nevertheless, it is expected to reduce through its future earnings and cash flows to be generated from its development projects.

View & Valuation. Our target price increased to RM1.68 (from RM1.60 previously) following the revision in our property valuation. BUY.