Foreign selling of Malaysian equity does not appear to be ebbing, four weeks into the current phase of portfolio outflow. Foreign selling is expected to persist. 

After three weeks of fighting to maintain the support, the market relented last week. The KLCI lost -1.35%, the third steepest decline in a week this year. With the loss, the KLCI became the worst performing among the major Asian indices so far this year.  We expect the market to be lumbering towards the end of the month. The onset of a 2-week school holiday break (first fortnight of June) is also a deterrent for investors, especially retailers from building a sizeable position.

• Foreign selling of Malaysian equity does not appear to be ebbing, four weeks into the current phase of portfolio outflow.
• Investors classified as “foreign” sold equity listed in the open market on Bursa (i.e excluding offmarket deals) amounted to -RM544.0m on a net basis last week, compared with -RM537.7m the week before. It was the highest in three weeks, and was also the 8th week this year that the amount had exceeded RM500m.
• Foreign investors had been net sellers in the last four trading days. The RM174.5m sold on Friday was the highest in 8 trading days. It had been consistent selling as opposed to heavy dumping. 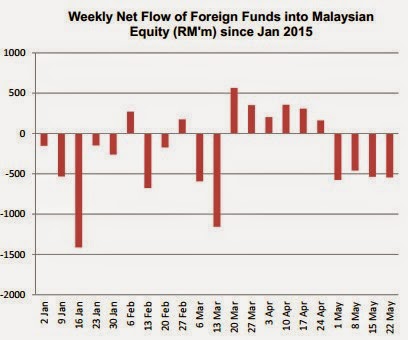 • In the last four weeks, foreigner investors had offloaded -RM2.12b in the open market. This has increased the cumulative net foreign outflow in 2015 to -RM4.75b. In comparison, the cumulative foreign outflow for the entire 2014 was -RM6.93b.
• Foreign participation (daily average gross purchase and sale) on Bursa declined further last week after dropping below RM1b the week before. The average amount traded was only RM840m last week, the second lowest this year after the Chinese New Year week (which was a truncated 2.5-day trading week).
• Although foreign participation is easing, overall market volume did not decline as local participation propped up market activity. Local institutions absorbed RM568.7m last week, the 4th straight week of purchases during which RM2.3b had been mopped up. Average daily trade surged to RM2.37b, the highest in five weeks.

• Although average retail volume rose 19% last week to RM763m, retailers were still net sellers by -RM24.7m. However, we believe a significant portion of the selling was still associated with Malakoff, whose IPO was listed two Fridays ago.