Naga 7 will be delivered by month-end as scheduled, we learned from our recent communication with management. In typical UMW-OG style, the jack-up was snapped up for work six months before the construction is completed. Naga 8, which will be delivered in Sep, is still not contracted, but we think that it will not be for long as management actively bids for 29 contracts worth RM5.6bn. We continue to value the stock at 15x CY16 P/E, on par with our target market P/E. We keep our Add call, with a Middle Eastern foray and a Naga 8 contract as potential re-rating catalysts.

We recently touched base with UMW-OG’s management on its two newbuilds, namely jack-ups Naga 7 and Naga 8. Naga 7 is now 99.02% completed and is

set for delivery by month-end. The jack-up has been signed up to service a 120-day, US$20m contract with Frontier Oil in the Philippines effective next month, with an option for a 180-day extension. Meanwhile, Naga 8, which is expected to join the fleet in Sep this year, is 66.85% underway. Management has yet to clinch a contract for the jack-up, but it remains very active in the bidding circuit, gunning for 29 contracts worth RM5.6bn. As at Dec 2014, the company had an order book of RM1.9bn.

We are encouraged that UMW-OG’s fleet expansion is on track. Secured in Jul 2014, the early contract for Naga 7 should allay any concerns about the company’s ability to deliver Naga 7 and Naga 8. We are also heartened that management has demonstrated an astute pricing power. The Frontier Oil contract for Naga 7 translates into an attractive daily charter rate (DCR) of US$166,667/day,  which  is  higher  than  the  regional  average  of US$140,000-150,000/day. Furthermore, the company last month landed a 100-day, US$18.7m contract with PetroVietnam for end-client Korea National Oil Corporation in Vietnam starting Jun this year. Excluding mobilisation cost,the DCR works out to US$160,000/day, impressive in the current industry environment and matching the DCR that the jack-up is currently fetching from its PTTEP’s Myanmar contract, which was secured in Jul 2014. 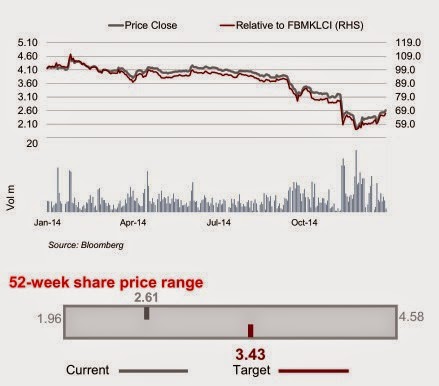 What You Should Do

We advise investors to accumulate UMW-OG shares. The company has evolved
from a local player to a force to be reckoned in Southeast Asia, and is now on the verge of being a global player if it secures a contract in the Middle East by
year-end.