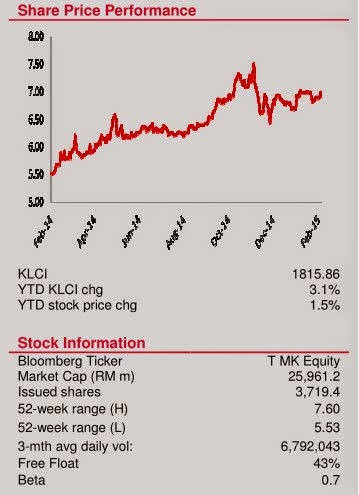 Yesterday, Telekom Malaysia (TM) announced the acceptance of Letter of Award (LoA) from the government of Malaysia for the implementation of

The investment cost for the HSBB 2 and SUBB project will be RM1.8b and RM1.6b, respectively, for a period of ten years.

The long-awaited outcome of the broadband contract award is well within our as well as the market expectations.

We understand that these contracts are the public-private partnership (PPP) arrangement between the government and TM and are likely to utilise the Universal Services Provision Fund (USP).

While the details of the contracts have yet to be ironed out, we believe the targeted coverage areas should not be far off in contrast to the previous Budget highlights.

To recap, under the 2014 Budget, the Government has allocated an investment of RM1.8b to provide additional broadband coverage and facilities in the urban  areas  and  targeted  to  benefit  2.8m households nationwide. Meanwhile, the initiative also aims to increase the Internet speed to 10 Mbps.

The group’s broadband demand is expected to remain buoyant, despite a challenging CY15 outlook as a result of the GST implementation and the rising

cost of living. The higher broadband demand is expected to be underpinned by: (i) the continuous introduction of more network convergence services, (ii) affordable broadband pricing, and (iii) raising awareness of the benefits of broadband adoption.

Risks to Our Call

The Company’s principal activity is establishment maintenance and provision of telecommunication and other related services under government licence.