Federal Government expenditure has grown tremendously in the last 10 years. Much of the revenue to finance the expenditure has been petroleum-related. The significant retracement in crude oil price has raised concerns whether revenue and hence government expenditure will be severely affected. However, we believe these concerns may be exaggerated as the Government’s revenue exposure to falling oil price is naturally hedged by its subsidy payments.

Oil price slumping due to weak demand and excess supply. Oil prices have declined by almost -31% since reaching a high of USD112.36 in June this year. The decline is attributable to the weak global demand as the world grapples with a slowdown in key major economies such as the Eurozone and China. The emergence of shale oil is contributing further to the depressing the oil prices with the US aggressively pursuing this unconventional oil. Shale oil is possibly seen as a major threat to the OPEC countries. Global needs are falling more than OPEC’s production thereby keeping prices muted. US oil production is also on the rise but its domestic demand is not keeping pace with the growth in supply. According to the International Energy Agency, the use of imported fuel and other liquid fuels in the US continues to decline in 2014 as a result of increased domestic oil production thereby reducing demand and depressing prices further. 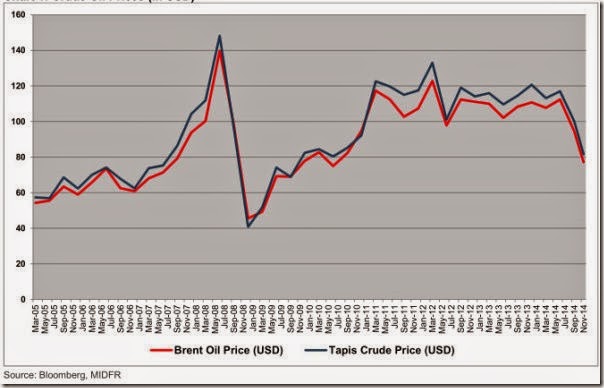 Malaysia’s oil revenue…a critical source for Government coffers. Revenue derived from oil production is one of the sources of Federal Government revenue. The oil revenue is derived basically from petroleum income tax, petroleum royalties, petroleum export duties and dividends from PETRONAS. Revenue from these components contributed as much as 38.5% of total government revenue in 2009. However, this incidence is falling. In 2013,
the percentage was only 30.3%. By 2015, the estimated contribution of petroleum to Government’s coffers will fall below 30% at only 26%. It is the Government’s explicit intention to reduce its dependence on petroleum-related
income. The GST to be introduced next year is partly aimed at this objective. 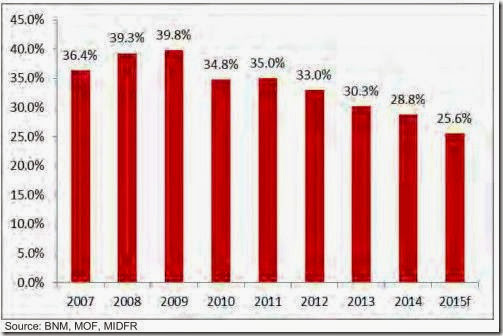 Government petroleum-related revenue does not seem to correlate with oil price. This is mainly explained by the fact that the bulk of the petroleum revenue is contributed in the form of dividend (41.7% in 2013) from PETRONAS. PETRONAS does not have a fixed dividend policy. From 2008 to 2011, following the aftermath of the global financial crisis, the quantum of PETRONAS flat payout increased and maintained at RM30b p.a. It was a 25% increment from RM24b in 2007. The payout is estimated to be RM29.0b for 2014, and budgeted to decline further to RM27b in 2015. 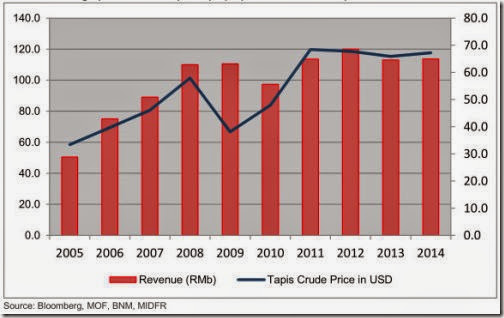 Lower oil price will inevitably compromise Federal Government’s revenue in 2015. While Government petroleum-related revenue does not seem to correlate with oil price, it would be wise to be conservative and assume that the current soft price situation will compromise revenue in 2015. A big decline is expected to be due to lower petroleum income tax, which we estimate could be as much as RM4.9b. Another potential source of variance is PETRONAS dividend. However, we expect PETRONAS to keep to the Government’s budgeted RM27b dividend, which is already lower than the RM29b estimated payout this year. All considered, the Government may be looking at a shortfall of RM6.3b against its projected income in 2015 due to the potentially lower oil-related income, all else remaining unchanged.

Reduced subsidies to compensate for eroding oil related revenue. The Federal government spend more than RM43.3b in subsidies for the year 2013 or 20.5% of its federal expenditure. For 2014, this figure is expected to be lower at 18.3% or RM40.6b. In 2015, the amount is expected to decline below RM40b for the first time in four years to only RM37.7b. As the government has been downsizing its subsidies expenditure in order to consolidate its financial deficit, it can further reduce its subsidies expenditure in order to compensate further shortfall in petroleum related revenue. 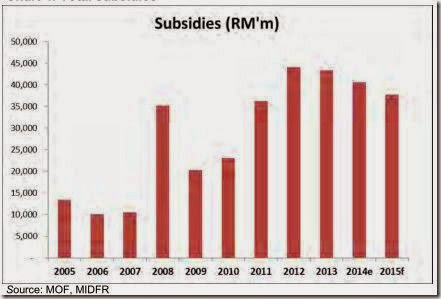 Of the RM37.7b total subsidies in 2015, RM19.2b is estimated to be for fuel, which includes RON95, diesel and LPG. The biggest scope for subsidy saving would be at the pump. At current RON95 pump price of RM2.30/l and diesel of RM2.20/l, the subsidy borne by the Government in November is 13sen and 12sen per litre respectively. Assuming that this is the subsidy element for next year (probably in the form of a fuel allowance/assistance for the eligible users), the liability on the Government will be only RM3.0b for 14b litres of petrol and 10b litres of diesel, which is roughly the annual consumption of motorists in Malaysia. We do not know the exact allocation for petrol and diesel subsidy next year. If the amount was RM10b, the savings to the Government would be RM7b, whichwould significantly offset the shortfall in revenue.