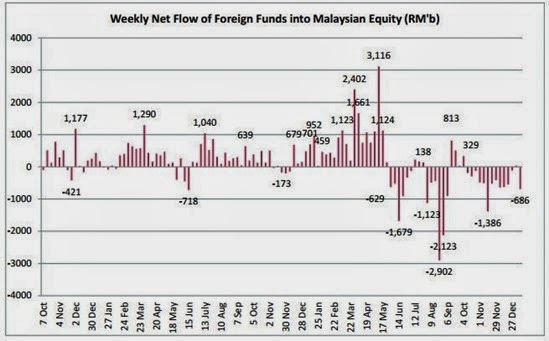 •  After  7  trading  days  in  2014,  it  is  clear  that  foreign  investors’  appetite  for  Malaysian  equity  is currently  very low. Foreign funds sold -RM686.4m net of Malaysian stocks in the open market (i.e excluding off-market transactions) last week, the highest in two months.
•  In the last 14 weeks, a total of -RM6.5b of foreign money had exited Malaysian equity, or an average of -RM464m a week.
•  Foreign  funds  were  net  sellers  every  single  trading  day  last  week.  Foreign  selling  was  aggressive on Thursday and Friday , offl oading -RM211.2m and -RM327.2m respectively. The selldown on Friday was  the  highest  in  a  day  since  November  13,  when  -RM427m  left  amid  trepidation  over  the  U.S
Government shutdown.
•  However, we note that although foreign participation increased last week, the level of activity did not refl ect an “exodus”. Participation rate (average daily gross purchase and sale) rose to RM893m, still less than the RM1b mark, and about RM100m lower compared with the daily average of RM991m in 2013.
•  Local retailers are returning to the market, and were net buyers for the second week running. We note however that retailers sold on Friday, probably on profi t taking ahead of the holidays this week.
Participation rate surged last week to RM957m, from RM688m the week before.
•  Local institutions continued to absorb the selling by foreign funds. Local funds bought +RM584.7m
net last week on a signifi cantly active participation. Participation rate surged past the RM2b mark at RM2.2b. It was only the fourth time it exceeded the mark since September last year.