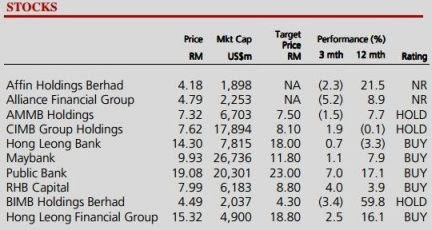 Back to domestic-focused banks; PBK and HLB are our new top picks.With uncertainties and macro weakness within emerging ASEAN in 2014, we believe Malaysian banks will refocus on domestic growth. We switch our top picks to PBK (upgraded; BUY, TP RM23.00) and HLB (BUY, TP RM18.00), both leaders in the domestic consumer and SME banking scene. MAY (BUY, TP RM11.80) will remain an important domestic play, given its dominant market share in key areas and more importantly, its deposit franchise. While banks will continue their regionalisation agenda, we believe this year, efforts will be targeted at consolidation to build a stronger base for growth when the region recovers. That said, MAY is expected to regionalise its consumer banking franchise this year.

High quality laggards: HLB.HLB and CIMB were key banking stock laggards in 2013. Our pick for this theme in 2014 is HLB. With the strong platform laid (post-EON), HLB will need to leverage on this enlarged base. Focus over the next 12-18 months will be on Islamic banking, SME and wealth management. While CIMB was plagued with election woes in 1H13, it did not recover post-elections due to weakness in its key regional markets and a failed bid for a Philippine presence. Earnings were further pressured with RBS in the picture. These will likely remain issuesin 2014.
We believe CIMB (HOLD, TP RM8.10) will remain rangebound until a bull capital market re-emerges.

Balance sheet optimisation: HLFG and RHBC. We believe there are still opportunities to realise value for HLFG (BUY, TP RM18.80) and RHBC (BUY, TP RM8.80). We seevalue in HLFG with the significant growth noted in HLA, its insurance arm. A privatisation of HLFG, replaced with a possible listing of HLA, would unlock value for HLFG. RHBC remains a privatisation candidate, coupled with a
restructuring angle with MBSB (Not Rated) is still in the picture.

Earnings growth riding on M&A revenue accretion.We forecast 11%earnings growth in 2014 led by stronger revenues post-M&A, as integration costs taper off. This should be visible in CIMB, RHBC and AMMB. NIM squeeze is expected to ease, but topline growth will be capped by a flat loan growth at 11%, largely business driven. Consumer lending may soften with fiscal tightening (subsidy cuts),
while BNM has also imposed stricter consumer lending rules to rein in rising household debts.