With the elections and budget announcement out of the way, Malaysia looks set to continue with its economic expansion plan which was interrupted by this year’s political calendar. A prudent budget focusing on accelerating investments and removing subsidies was announced, as well as both increases and cuts in taxes. In essence, we believe construction activities should remain robust, while consumer spending will be negatively affected. A gradual global recovery should however help with its exports to offset some of the domestic weakness.

ASEAN: No. of companies by market cap and liquidity 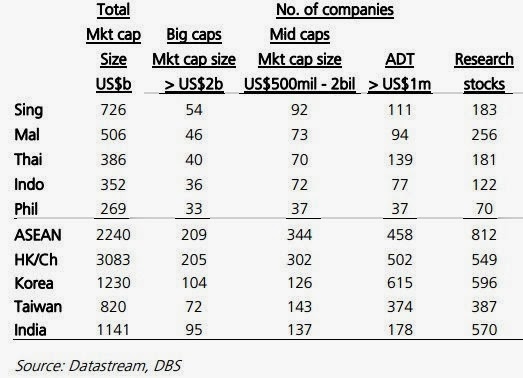 The lower subsidies will be implemented together with targeted cash assistance, but it could still weaken consumer spending and adversely affect some of the consumer stocks.
In addition, the Government will introduce the Goods and Services Tax (GST) in 2015 (at 6%) to widen its tax base. We expect the Consumer sector to be negatively affected by these measures.

Malaysia outperformed when the region is negative 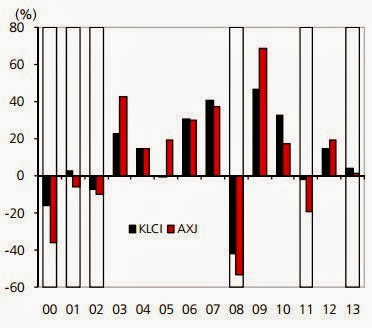 However it is not all negative with the subsidy cuts. The rationalisation includes energy prices and a fuel cost pass through mechanism would be positive for the Utility companies. Gas players will also benefit from the programme, given growing gas demand and volume. A potential change in the tax system (to GST) could benefit some of the sectors with higher tax rates, such as the stock exchange. The 2014

Budget also indicated that the construction of the West Coast Expressway (WCE) will proceed, allaying worries that it would be delayed. Some other projects to be continued are the Gemas-Johor Baru double tracking or southern double tracking, as well as the upgrading of East Malaysian airports. Utility, Banks and Construction stocks should lead the index higher in the coming quarter. 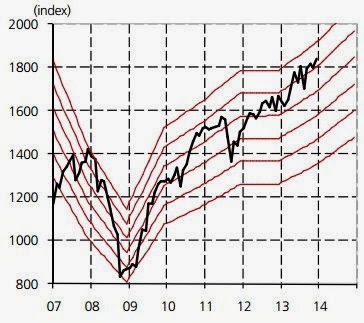 We have upgraded the Malaysia market to Neutral from Underweight in the current quarter from a defensive stance, as it is likely to face less macro headwinds than the other ASEAN markets such as Indonesia. Concerns like high debt issuance, which could pressure the outlook for the MYR, keeps us less-than-positive in the market, short of an overweight in the market. As the budget deficit is cut from 4% towards 3% by 2015, and with sugar subsidies removed, we believe there will be downside risks to growth and upside risks to inflation next year. Its valuation, which is already at 15.4x FY14 PE and a 38% premium to the region, leaves little room for re-rating, in our view.