RECAP OF OUR STATED VIEWS

In our Strategy note dated 8 January 2014,we offered the following views with regard to equity market direction this  year,  its  downside  range  as  well  as  potential  event  risks  (which  we  deemed  as  not  imminent)  that  may jeopardize our rather sanguine outlook: 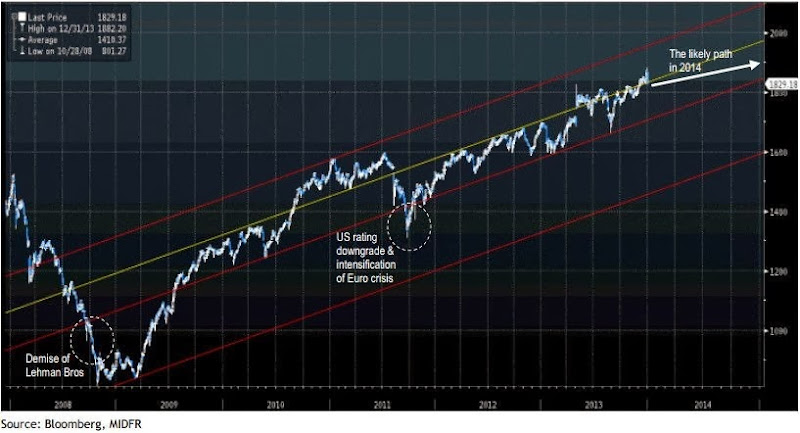 “The  FBM  KLCI  shall  continue  on  its  upward  trajectory  on  favourable  macro  conditions.  The  FBM  KLCI  is  expected  to remain  in the upper half  of its secular upward trajectory during the next 12 months,  supported by expectations of (i) gentler yet still robust domestic growth momentum, and (ii) brightening external economic conditions.

Potential downside would be limited to 1,750-1,700 points range. The largely favourable macro scenario shall limit the downside on the FBM KLCI to between 1,750-1,700 points range, beneath which resides the lower half of its secular trend channel.  The lower half domain was last visited,  albeit briefly, in 2H11 pursuant to the downgrade of US sovereign rating to AA+ by S&P as well as worsening sovereign debt situation in Europe.

…as major event risk is presently deemed as not imminent. Presently, we see no fundamental triggers for a revisit to the lower half of FBM KLCI secular trend channel. But then again, like in the past, the timing of the actual trigger can evade the scrutiny of the most seasoned market watchers. Furthermore, the list of the potential triggers can never be exhaustive,  but  some  of  the  plausible  suspects  include  (i) the  breakdown  of  China’s  shadow  banking  system  (with attendant  consequences  on  property  prices  and  overall  output  growth),  and  (ii) massive  currency  (capital)  flight particularly  from  countries  suffering  the twin  (external  and  fiscal)  deficits.  However,  at  this  juncture, we deem their probability of occurrence as low.”

Events of last week not likely morph into major eventrisks.In spite of what had transpired during the past week, we opine that (i)the less than favourable China’s Flash Manufacturing PMI number does not signify that its economy is about to fall off the cliff (as our house view is that China would successfully avert an economic hard-landing this year),  and  (ii) the  recent  currency  (capital)  flight  from  countries  suffering  the  twin  (external  and  fiscal)  deficits would not become out of control that it may result in a widespread contagion to other emerging market currencies.
Expect  DJIA  trend  support  to  hold  on  favourable  macro  outlook.  As  for  the  DJIA,  our  trend  analysis  suggests  a downside  support  at  15,000  points  level  with  the  market  upward  trend  duly  supported  by  US  favourable  macro trajectory.

Reiterate:  Market  lower  bound  remains  at  between  1,750-1,700  points  range. We  expect  the  FBM  KLCI  to remain in the upper half of its secular upward trajectory during the  next 12 months (refer to Chart above). While we do not think the recent correction has played itself out just as yet, on the downside, we reiterate our view of the local benchmark support levels at between 1,750-1,700 points range.

Reiterate:  Market  upside  may  be  capped  by  liquidity,  earnings,  monetary  and  valuation  factors. While  we  do not expect a doomsday scenario to transpire this year, nor  do we  expect the  FBM KLCI to repeat its rather stellar performance  last  year.  We  opine  so  on  the  premise  that  (i) the  incessant  albeit  measured  withdrawal  of  foreign liquidity (pursuant to the commencement of QE3 taper) to continue on in the months to come,  (ii)relatively muted FBM  KLCI  earnings  growth  of  circa  10%  in  2014,  (iii) expectation  of  a  hike  in  the  OPR,  as  well  as  (iv) Malaysia’s relatively  weak  albeit  improving  current  account  situation,  may  put  a  cap  to  the  prevailing  above-mean  market valuation going forward.