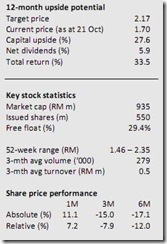 Dayang Enterprises announced a contract extension from long time customer, Murphy Production Operations last week. The news is a definite positive and brings their orderbook to an estimated RM1.2bn. More importantly, we view that Dayang is attractively priced at current level, trading at CY12 P/E of 11.2x and yielding dividends of 5.9%. As such, we maintain our BUY rating on the stock.

Comments
The contract extension is good news for the group and we foresee that there could be further renewals in the coming years for this job.
Given that it is a call up contract, earnings from  the contract will be lumpy hence there may be some volatility in quarterly earnings depending on work orders.
We will be making no adjustments to our estimates for this contract. Replenishment of up to RM170m has already been factored into FY12 earnings assumptions. As for margins, we expect the group to secure EBIT margins of up to 30%. This has been relatively consistent for TMS work since the group was listed in 2008.
Dayang’s orderbook is estimated at some RM1.2bn at the moment, inclusive of this contract. The bulk of their orderbook is made up of a TMS job for Petronas Carigali (worth RM802m) which extends until 2016.

Valuation and recommendation
We continue to have a BUY call on Dayang Enterprises with a TP of RM2.17 (previously RM2.04). Our revised TP is based on calendarised 1HFY12 EPS of 14.5 sen. We raise our TP as we are rolling over valuations from FY11 previously.
At current valuation, Dayang is attractively priced. The stock trades at a reasonable CY12 PE of 11.2x and continues to pay out attractive dividends of up to 10 sen per annum. We characterise the stock as one of the “safe” bets in the O&G sector because of their long term contracts and solid margins. Some excitement may just appear ahead as well on the M&A front as the group  is currently in discussions for potential collaboration with Perdana Petroleum (Perdana).
On that subject, we view it would make more sense if Dayang is to acquire the Petra Energy stake that Perdana still holds rather than buying directly into Perdana. Petra Energy’s business model is very similar to Dayang’s and they would have a near market monopoly of the TMS market with the acquisition. Also, recall that Dayang’s previous foray into the vessel segment (with Borcos Shipping) ended without much
fanfare and barely lasted 2 years.