KNM has been lifted out of a 3 year share price low with 2 new contract announcements this week. The group’s orderbook now  stands at RM5.3bn but we caution that RM2.2bn of that is for the UK Biomass  project which has yet to reach financial close. Otherwise, KNM appears to be progressing well in terms of job flow and could see earnings recovery in 2H11. We now value the group at 1x book value of RM1.72. Maintain Trading Buy.

News
KNM Group yesterday announced that their wholly owned subsidiary, KNM Process Systems had signed a contract with Lukoil Uzbekistan Operating Company in respect of the documentation and equipment supply facility “booster compression station” at the Khauzak site in the Republic of Uzbekistan.
The project amounts to RM227.6m (US$71.6m @USD/MYR3.18) and is expected to be completed in 23 months.
To note, earlier this week KNM also announced a RM70.6m contract from Octagon Consolidated for construction of a waste energy plant in Sri Lanka. 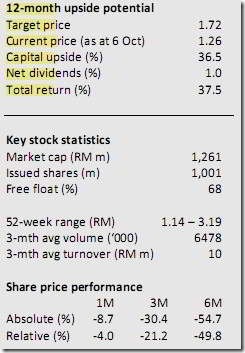 Comments
The recent contract announcements have come as a relief for KNM as it hasbumped the stock out of their 3-year low of RM1.12/share. The stock currentlytrades below the 1Q2009 trough of RM1.30/share and is even trading 26.6% below book value of RM1.72.
We believe that these new jobs have been captured in our forward replenishmentestimates of RM1.5bn for 2012. As such, we make no  changes to earnings at this juncture.
To note, this is the 2nd major job the group has secured from Lukoil for work inUzbekistan. We view this to be a positive development as it indicates that KNM is gaining traction in a new market with a growing O&G industry.
The jobs mentioned above will bring the group’s current outstanding orderbook to roughly RM5.3bn.
However, we caution that not all of the RM5.3bn is  secure at the moment. Some risk remains with the UK Biomass project as financial close has yet to be achieved.
The project is worth RM2.2bn and the financial close has seen more than 6 months delay so far.
Our forward estimates could be at risk if this project does not reach resolution by year end. However, if the group does manage to close more new projects in the interim, earnings may not need to be adjusted drastically as new jobs will offset the lack of earnings recognition from the UK project.

Valuation and recommendation
KNM’s share price movements have been very erratic since 2008 and concurrently, earnings have been very choppy. If not for their tax incentives, the group would be loss making for 1HFY11 and even through FY10.
As such, we view that the PE multiple is not a suitable valuation methodology and we are switching to P/Book. We now value KNM at 1x P/Book of RM1.72 (RM2.25 previously on FY12 EPS pegging 15x market PE). We maintain our Trading Buy call given the positive news flow on contracts. News on  the UK Biomass project will have to be closely watched as it would serve as a re-rating catalyst for the stock should it finally come into fruition.