Decides against plantation land purchase IOI’s plans to purchase 11,977ha of plantation land from Dutaland has been called off but Dutaland has yet to accept the reason for the termination which may lead to a legal suit. Although the termination is a setback to IOI’s plan to grow its plantation landbank, it may allow the group to look for better opportunities elsewhere given its spare financial resources. We continue to have a Trading Buy call as rising CPO prices on the prospect of a La Nina may be a catalyst.

News
IOI Corp announced that its sale and purchase agreement (SPA) with Dutaland Berhad for the acquisition of 11,977.91 hectares of plantation land for RM830m has been terminated due to non-compliance of certain terms and conditions.
However, Dutaland does not accept IOI’s reasons for termination of the SPA.  Accordingly, Dutaland has notified the stakeholder, OSK Trustees Berhad, not to remit to IOI the deposit of RM83m being the 10% deposit paid by IOI under the SPA and any interest accrued thereon.

Comments
Given that Dutaland does not accept the termination, a legal suit may ensue. Dutaland was expected to make a profit of RM511m from the sale of the land and they may seek a specific performance relief from the court for the transaction to be completed.
At the price of RM69,294/hectare, many considered the purchase to be a pricey one. As such, some fractions of the market would perceive this to be a positive development.
For us, we were positive on the group expanding their hectarage and believed that the new hectarage would at last fuel FFB growth which has been stagnating since 2008. Although the termination of the SPA is a setback to IOI’s plan to increase its
FFB, it may allow the group to look for better opportunities elsewhere. However, this issue between IOI and Dutaland will have to be resolved first.
On the earnings front, we had not factored in any earnings from the new hectarage. As such, no changes need to be made arising from the termination of the SPA. We had previously postulated that the new hectarage would add 5.3% and 7.7% to
FY12 and FY13 net profits respectively.

Valuation and recommendation
We continue to have a Trading Buy call on IOI as CPO prices have already corrected and appear to be rising again. While we don’t expect prices to strengthen significantly in the long term, there could nonetheless be some adjustment back to the RM3,000/mt level if more news on the La Nina emerges in the market in coming weeks.
That said, prices could also weaken further if there is more news on improving soybean supplies with ongoing South American plantings. Whatever the case, we view it to be a trading market at the moment and IOI makes for a good proxy given their healthy liquidity.
Our target price of RM6.11 is unchanged based on FY12 P/E of 20.4x which represents mid-cycle valuation. 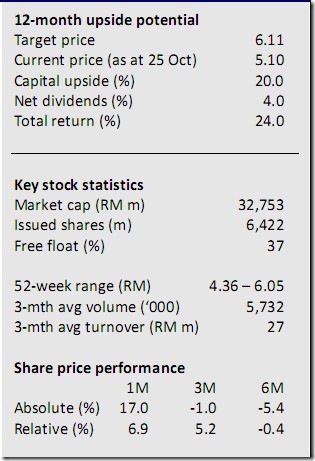