Malay and Indian groups driving consumption spend
Malaysia’s household income expanded at 7.3% CAGR from MYR3,686/month in 2006 to MYR6,958/month in 2016. Out of the four main sources of income, the fastest growth was seen in property and investment, as well as current transfer from the government.


Malaysians are earning more than spending: Monthly household consumption expenditure increased from MYR1,953/month in 2005 to MYR4,033/month in 2016 at 6.8% CAGR. This is at a slower rate compared to household income growth.

Highest propensity to spend in Kelantan, Pahang and Terengganu: Putrajaya has the highest mean household consumption expenditure of MYR6,971/month. However, highest propensity to spend was seen in Kelantan (68%), Pahang (66%) and Terengganu (66%).

Chinese have the highest monthly expenditure: The mean monthly household consumption or Chinese was highest at MYR5,106 in 2016 vs. Bumiputera at MYR3,712 and Indians at 4,272.

Bumiputera and Indians display highest spending growth: Household expenditure of both groups grew at 6.3-6.4% CAGR from 2014 to 2016, while Chinese spending grew only 5.6% CAGR.

Household income and expenditure by regions 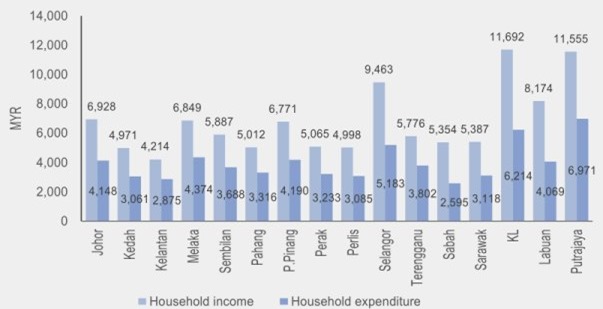 
Different ethnic groups have different priorities on spending: : Chinese spend most on housing with 26.6% of expenditure vs. Bumiputera and Indians at 22.1% and 25.2%. Sep Bumiputera spend 19.8% on F&B versus Chinese and Indians at 14.8% and 16.2%, eespectively.

Malaysians are spending more on restaurants and hotels: Restaurant and hotels posted the strongest growth amongst Malaysian consumers. It accounted for 13.4% of household expenditure in 2016 vs. 10.9% in 2009. On the contrary, consumers are spending less on
F&B segment – foodstuff like rice, seafood, vegetables etc.