■ A new independent valuation report on Splash is set to be completed next month,  according to a newspaper report.
■A price tag equivalent to a 15% discount to BV is being negotiated, the report said.
■ Water deals could be completed in April. Gamuda and Taliworks are beneficiaries.


● The Edge Weekly, quoting unnamed sources, reported that an independent valuation report on Syarikat Pengeluar Air Selangor (Splash) by consultants acting for the federal government could bring an end to the long-drawn-out consolidation of the water sector. The report is slated to be released in mid-Dec. Details of the consultants were not disclosed.

15% discount to book value = RM2.7bn
● Parties involved in the Splash deal (state government of Selangor and Splash) are working on a 15% discount to the BV of RM3.2bn, The Edge report said. The discount is also being considered by the shareholders of Splash. Gamuda owns 40% of Splash. The balance 60% is equally owned by The Sweetwater Alliance (TSWA) and Kumpulan Perangsang Selangor (KUPS MK, NR). The 15% discount to BV effectively works out to be RM2.7bn.

Water deal could be concluded in Apr 2017
● The Edge said its sources indicate that if the new offer for Splash is accepted, the water deal could be concluded in Apr 2017. This coincides with the 6-month extension of the resolution of the water consolidation to Mar 2017. Energy, Green Technology and Water Minister Datuk Seri Dr. Maximus Ongkili said recently that the extension was to allow for the final negotiations on the takeover of Splash. 0.75x BV is a much better offer compared to the previous 0.1x BV
● A 15% discount to BV or 0.75x BV translates to a takeover offer of RM2.7bn. This is a much more attractive offer compared to the last one (which was rejected by Splash) at a mere 0.1x BV or RM251m. Although a 15% discount to BV is still below the 1x BV valuation benchmark for the preceding takeover moves by PAAB (federal government) on other water assets, this is still good news for Splash. Splash would, however, realise a loss on disposal of RM480m (RM3.2bn minus RM2.7bn). Gamuda’s 40% stake is worth RM1.1bn cash
● At this juncture, there has yet to be any official new offer being tabled to Splash by Air Selangor, which is the new entity undertaking the water operations of the state of Selangor. If the transaction is set at a 0.75x BV multiple, Gamuda’s share works out to be RM1.1bn or 45sen/share based on current outstanding shares. TSWA and Kumpulan Perangsang (which own a 30% stake each in Splash) would each receive RM816m. 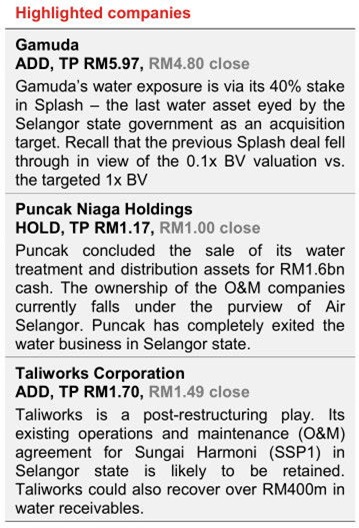 Taliworks remains a beneficiary post-Splash deal
● If the Splash deal gets resolved, Taliworks would then be an indirect beneficiary as it would recover its receivables. Water receivables related to 100%-owned SSP1 stood at RM471.5m (39 sen/share). This is classified as a trade receivable owed by Splash and is likely to be recovered (based on a lump sum payment or staggered basis) once the Splash acquisition issue is resolved. The cash should enable the group to better explore its M&A options. It would also raise the chances of higher dividends.

Delay and pricing risks in the water deal
● We maintain Neutral on the water sector given persistent delays relating to the water restructuring move in Selangor. This news suggests that a potential new offer for Splash is likely within the next 3-4 months. Gamuda and Taliworks remain the beneficiaries of a revival in the water deal.