SECTOR UPDATE
Sector core net profit growth remained moderate at 1.5% yoy and 1.6% qoq in 3Q16. We expect 4Q16 to be a stronger quarter for the retail and hotel segments in view of the holiday and festive season. We also think the implementation of the revised REIT guidelines will take place by end-16 or early-17. Maintain OVERWEIGHT on the sector, given the persistently low interest rate environment and relatively lacklustre earnings growth in the other sectors.

WHAT’S NEW
• Moderate growth in 3Q16. Excluding fair value gains, sector core net profit grew 1.5% yoy and 1.6% qoq in 3Q16. Three stocks reported lower yoy core net profit, compared with only one stock in 2Q16. Of the seven REITs under our coverage, Pavilion REIT performed below our expectation and MQREIT beat our estimate.
• Weaker performance from prime retail malls. Suria KLCC and Pavilion Mall experienced temporary hiccups in 3Q16 due to the malls’ reconfiguration exercises. We expect the performances of both malls to normalise in 4Q17 and 2Q17 respectively. On a more positive note, tenant sales at both malls improved yoy while rental reversion ytd was at 5%.

ACTION
• Maintain OVERWEIGHT. We think the REIT sector will remain appealing with Bank Negara Malaysia (BNM) maintaining the overnight policy rate (OPR) at 3.0%, coupled with relatively uninspiring corporate earnings growth in the other sectors. We expect the REIT sector to post stronger results in 4Q16, especially for retail and hotel REITs on the back of the holiday and festive season.
• Retail REITs. We like IGB REIT (IGBREIT MK/BUY/RM1.62/Target: RM1.88) as we believet it has the lowest earnings risk (due to solid rental reversion and highest retail sales) and decent dividend yields of 5.1%. For the longer term, the sponsor of IGB REIT is constructing MidValley SouthKey, which is expected to be completed in 2018 and eventually be injected into IGB REIT.
• Diversified REITs. We like Sunway REIT (SREIT MK/BUY/RM1.82/Target: RM1.85) as it offers an attractive dividend yield of 5.0% coupled with a long list of potential assets for future acquisition. Although its office segment remains under pressure, we believe the segment’s contribution is marginal (at only 5% of total revenue) while Sunway REIT will continue to leverage on its expertise in managing retail malls.
• Office REIT. We like MRCB-Quill REIT (MQREIT MK/BUY/RM1.28/Target: RM1.40) for its built-to-suit strategy which allows it to lock in tenants for a longer period. MRCB-Quill REIT also operates on a dual-sponsor structure which enables it to have an extensive list of assets for future acquisition. We reckon MRCB-Quill is likely to emerge among the top performers in the sector, given its on-going acquisition of Menara Shell which will lead to its market cap surpassing the RM1b mark and thereby improve its trading liquidity.

ESSENTIALS
• Axis REIT: Biggest profit decline. Axis REIT reported its third consecutive quarterly slump in core net profit in 3Q16 as there was no income from Axis PDI Centre, which was closed for a major refurbishment since 4Q15. Phase 1 of the redevelopment (cost: RM210.9m) will consist of a 515,000sf warehouse which a subsidiary of Nestle Bhd has signed a 10-year lease to take up the space. Based on our latest check with management, construction works at Axis PDI Centre will begin in November and will take 18 months to complete. We have factored in contribution from Phase 1 of Axis PDI Centre into our earnings forecast starting 2H18. In 2014, Axis PDI contributed 6% to Axis REIT’s revenue. In 4Q16, we expect the decline in core net profit to narrow as the impact of Axis PDI Centre will normalise in 1Q17.
• Temporary hiccup at two prime retail malls. Performances of Suria KLCC and Pavilion Mall were affected during 3Q16 in view of their reconfiguration exercises. At Suria KLCC, the reconfiguration of level 1 (men’s and women’s luxury) will be completed in 3Q17. Pavilion Mall saw a major rearrangement of tenants as works at The Extension are due to complete in Nov 16. The Extension will consist of a 10-floor retail mall which will have new flagship brands and new concepts including Coach, Muji, Mango, Huawei, Lego and ToysRUs. In view of the reconfiguration exercises, occupancy rates at Suria KLCC and Pavilion Mall dropped to 96% and 92% in 3Q16 (3Q15: 98% and 97%) respectively.
• Two share placement exercises in 4Q16. Axis REIT will carry out a share placement of up to 20% more new units to partially finance the refurbishment of Axis PDI Centre. This is also expected to reduce its gearing ratio from 40% to 25% post completion of Axis PDI Centre. Meanwhile, MQREIT will also finalise the deal on the RM640m Menara Shell in 4Q16 whereby 65% of the purchase consideration will be funded by a private placement. Upon completion of the acquisition, MQREIT’s portfolio asset size will grow 40% and its profit to grow 57% in 2017.
• SC’s revised REIT guidelines. Based on channel checks with corporates, we are of the view that the proposed changes to REIT guidelines should be approved and will be implemented by end-16 or early-17. The key changes to the revision include: a) raising the threshold for REITs acquiring under-construction assets from 10% to 15%, and b) allowing REITs to undertake property development as well as acquire vacant land. This should be positive for the sector as undertaking greenfield projects would enable REITs to enjoy higher yields than from acquiring mature asset. 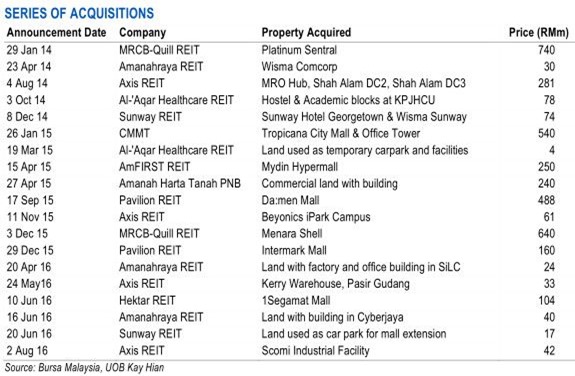