● Malaysia Budget 2017 looks less supportive for growth than we initially anticipated, and as such raises some downside risk to our 2017 GDP forecast (CS: 4.5%; consensus: 4.3%).
● Spending is expected to decline by 0.7 pp of GDP, with cuts concentrated in public university grants and also further subsidy rationalisation, partly offset by increased handouts to consumers.
● It is also unclear to us if the public sector-wide fiscal position is expansionary after including non-financial public corporations. Broader public infrastructure spending is expected to fall 1%yoy in 2017, from a 17%yoy increase in 2016. We believe some of this could reflect timing issues, and as such believe that 2017 could eventually see the stronger rise rather than in 2016.
● We believe that the burden of growth could shift more towards monetary policy rather than just fiscal policy in 2017, and the probability of a rate cut in 2017 has likely risen given still
manageable inflation. 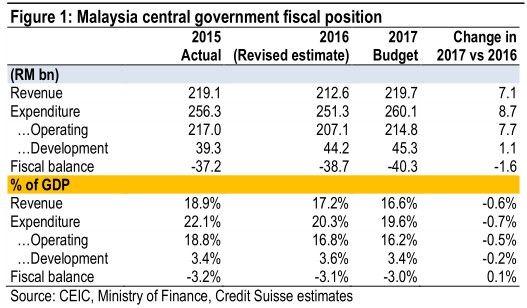 Budget 2017 less supportive of growth than we expected: Headline expenditure to GDP ratio is expected to fall by 0.7 pp of GDP, down to 19.6% of GDP in 2017 from 20.3% of GDP in 2016. This comprises of budgeted cuts in both operating and development expenditure (see Figure 1 overleaf).

Unclear if broader public sector wide fiscal position is expansionary: Including non-financial public corporations, development expenditure is budgeted to fall by 1% YoY in 2017, from a sizeable +17% YoY increase in 2016 (2015: -10% YoY). We believe that some of this could reflect timing issues and see some chance that the projected 17% YoY increase in 2016 ends up being realised in 2017 instead. We have seen some improvement in construction contracts awarded thus far, but public infrastructure disbursement has still been subdued.

Some downside risk to our 2017 GDP forecast, higher probability of a rate cut in 2017: We were of the view that growth will improve to 4.5% in 2017 (consensus: 4.3%), from 4.1% in 2016, driven by a less contractionary central government fiscal stance, a pick-up in broader
public infrastructure projects, together with lagged impact of oil and commodity price stabilisation. Today's Budget looks less supportive for growth than we initially anticipated, and as such raises some downside risk to our GDP forecast. We believe that the burden of growth could shift more towards monetary policy rather than fiscal policy in 2017, and the probability of a rate cut in 2017 has likely risen given still manageable inflation.

Spending cuts concentrated in grants and subsidy rationalisation: Grants to statutory bodies will be reduced by RM3.5 bn (0.3% of GDP), which likely reflect cuts to public university grants. Subsidies will also be reduced by RM2.2 bn (0.2% of GDP). These subsidy reductions reflect removal of cooking oil subsidies (RM2 bn), which were announced one day prior to Budget 2017. We believe the Budget might have incorporated some cuts to flour subsidies too, although of smaller magnitude (RM0.2 bn). We estimate these measures could add around 0.1 pp-0.2 pp to 2017 CPI.

Government increasing spending for consumers: The government is nonetheless targeting to increase spending to consumers through raising BR1M handouts by around 10-20%, and giving special cash payments to civil servants in January 2017.

Lower revenues due to Petronas dividend cuts; revenue estimates conservative: The government expects revenue to GDP to fall by 0.6% of GDP. This was driven by a RM3 bn cut to Petronas dividends, and also RM1bn cut to Bank Negara dividends. The government's assumptions for oil prices were nonetheless conservative in our view (US$45/bbl for 2017 and US$40/bbl for 2016). As such, the stabilisation in oil prices, if sustained, could give the government more space to spend later in 2017.

Off-budget measures to help consumers get credit: The government is also helping first time home buyers get access to credit to pay for homes up to RM300,000, in a tie-up with BNM, EPF, and four local banks. In addition, the stamp duty exemption will also be raised for these buyers. 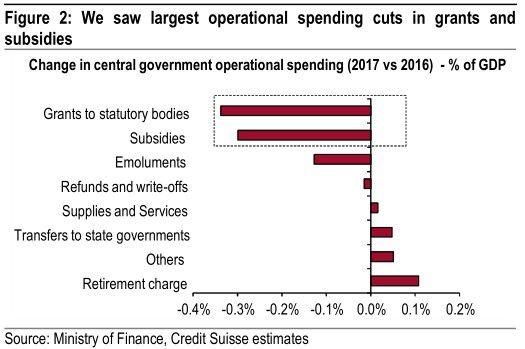