Malaysia - Downgrade from Overweight to Neutral

As the year progresses, the same factors that put the markets on a rocky road in the second half of last year are back in focus. Asia equities will continue to ride a bumpy road as leading indicators fail to signal any uplift in growth for the second half. Near term events such as timing of Fed rate hikes, MSCI ‘A’ share inclusion, and BREXIT are tail risks that could change risk appetites and equity risk premiums

The Malaysia market had a good run till April before sentiment turned for the worst when negative events surrounding 1MDB developed. With the international spotlight, sentiment towards Malaysia has turned negative. Foreign investors sold about US$1bn of Malaysia equities in May.

Apart from politics, in fact, the oil price and the rising ringgit have worked in its favour in the past few months, and foreign fund flows had been positive. There has been a slight moderation in GDP growth causing us to cut the GDP growth forecast from 4.5% previously to 4.2%, but DBS’ economist believes it is within expectations on the back of weak global growth. 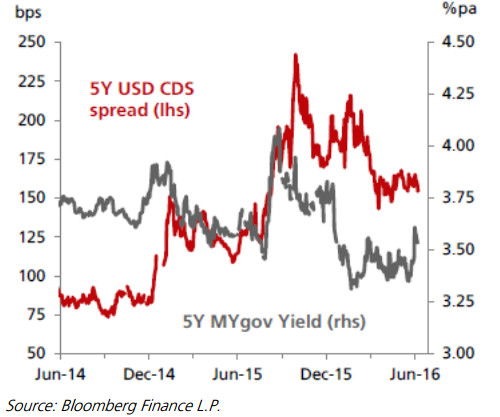 1Q16 results season has turned out to be disappointing, with more companies reporting negative earnings surprises, rising from 26% in 4Q15 to 34% in 1Q16. Heavyweight sectors such as Telcos and Plantations continued to face earnings risk from intense competition and poor FFB yields respectively. While the banking sector has by and large held up in the 1Q16 earnings season, selective corporate account exposure still led to asset quality concerns in selected banks, but this is unlikely to point towards systemic risks in the sector. Loan growth has moderated, as anticipated, given the more subdued retail and corporate sentiment. On a brighter note, NIM has stabilised as banks priced up their products while deposit competition has subsided.

Despite the outstanding issue with 1MDB, there is less stress in the bond market with interest rates in Malaysia drifting lower. We hence believe the recent market sell-off was driven by weak sentiment, and not fundamentals.

The DBS Alliance strategy team downgraded the target for KLCI from 1740 to 1700. We are downgrading the market from Overweight to Neutral. We note that there are some reasons to be less negative on Malaysia versus the consensus. Notably, banks are currently trading near -2SD of historical P/BV and have relatively lower earnings risk than other heavyweight sectors. The market is also less volatile than other regional markets. Domestic liquidity should help to limit downside.