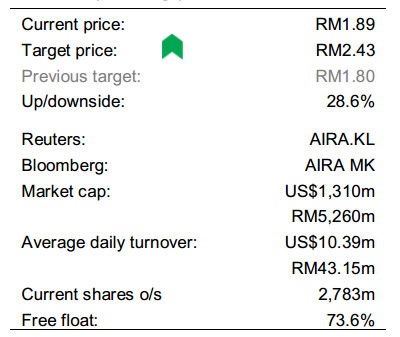 ■ FY16 looks like a good year for the AirAsia group, as its FY16 fuel price is largely locked in, while the recent ringgit appreciation may stick.

■ We upgrade our EPS forecasts to reflect the stronger ASEAN currencies, and raise our target price to RM2.43, still based on 6x CY17 P/E (peer range 6-12x).

■ Our Add call is intact; AirAsia will benefit from the return of foreign funds.

Most of FY16’s fuel consumption locked in
AirAsia has locked in at least 75% of its full-year FY16 fuel consumption, or at least 80% of the 2Q-4Q16 consumption, at an average jet fuel price of not more than US$54/bbl. The spot price of jet was US$48/bbl at the end of last week, so the strike price of AirAsia’s hedges is attractive. The high level of hedging gives clarity and stability to the most significant portion of its costs, protecting it against upside volatility in oil prices.

The ringgit has appreciated
Expectations for a gentler pace of US interest rate appreciation has helped emerging market currencies recover vs. the US$ in recent weeks, and if oil prices recover in the future, the ringgit should rise further. About 70% of AirAsia’s operating costs are US$-denominated (mainly fuel, operating leases, maintenance and overflying charges), which are unhedged. Also, its capex and financing costs are in US$. About half of AirAsia’s outstanding aircraft liabilities are unhedged, which will benefit from any ringgit recovery.

Changing estimates for regional exchange rates
We are lifting our estimates of exchange rates in the ASEAN region to take into account recent developments. For all forecast years, our average exchange rates are now lifted to RM4:US$1 (from RM4.50), Rp14,000:US$1 (from Rp14,500), and THB35:US$1 (from THB37). AirAsia does not hedge for currency risks on its operating cashflows.

Yield situation should not deteriorate significantly
We are forecasting a 3% yoy drop in AirAsia’s underlying yields for FY16, as Malindo has launched to Hong Kong and Ho Chi Minh, and may be looking at Shenzhen, Guangzhou and Kunming. Meanwhile, newcomer Rayani has entered domestic services since late-2015. But the impact of additional competition should be manageable.

Impact of competition should be contained
With only two aircraft, Rayani’s service has been the subject of passenger complaints. Although Malindo is expanding by 10 jet planes this year, some of its expansion is not in competition with AirAsia. Malindo also flies on unique routes not served by other airlines, (e.g. Amritsar, Lahore), and to destinations more than four hours away (e.g. Delhi, Perth), which impact AirAsia X instead. Malindo’s 2H16 plans to S. Korea, Japan and Australia also do not impact AirAsia.