■ The next step is the ratification of the laws; the first amendment is to be tabled at the Parliament in March next year.
■ It remains uncertain whether all TPPA members will ratify the laws by 2018

It is most likely that all the 12 signatories of the TPPA will sign the official documents on 4 Feb but the route towards a kickoff in 2018 may not be as smooth
■ Member countries are given a two-year period to complete the ratification process, during which they can still have domestic debates on the laws to be amended. Any or all may end up deciding not to be part of the deal by the end of the period.
■ For example, in Canada where the agreement was concluded by the previous government, its new International Trade Minster has stated that “signing does not equal ratifying” and pledged further debates during the two-year period.
■ By signing but not able to ratify the laws, the member country can still retain its status as a potential “full partner” of the TPPA.
■  The TPPA can only kick off if ratified by at least six original signatories with a combined GDP equal to 85% of the combined GDP of the original 12 signatories.

Impact not so immediate!

■ The ratification process would see as many as 26 amendments to be made to 17 existing laws. Nonetheless, the first amendment to the laws affected by TPPA would only be tabled in Dewan Rakyat in March next year.
■ We argued in our previous report that the impact may not be as big as suggested by PwC’s study (GDP higher by 0.6-1.15% pt from baseline), given that the conclusions were derived from the best-case scenario i.e. all tariffs eliminated with 25-50% nontariff cuts, focusing on specific sectors over a span of 10 years (when Malaysia’s economic structure may have changed significantly) after TPPA kicks off. MITI could conduct another cost-benefit analysis closer to that planned kickoff in 2018. 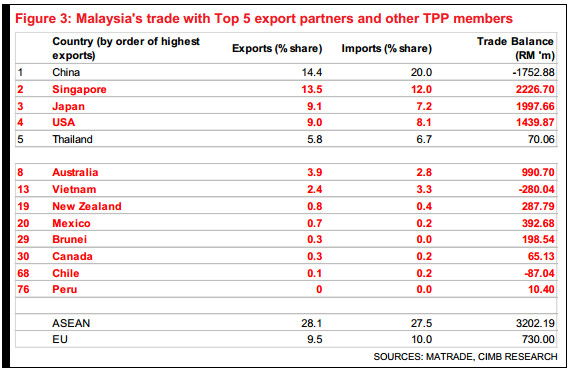 Given the need to hit that 85% GDP weight, it seems very clear that the agreement cannot enter into force without both the two largest economies, the US and Japan, in it. Even combining the US with the top 5 members after Japan (as ranked by GDP), that 85% share criteria would still not be met. Furthermore, it remains to be seen whether the US would ratify the deal come 2018. Political uncertainty in the US has somewhat marred this prospect.