■ Job cancellation risks from Budget 2016’s revision should not be overplayed.

■ Projects that have passed the approval stage and are undergoing tenders are safe.

■ ‘Tenders and awards season’ to pick up strongly from 2Q16. Overweight retained.

Major projects to commence under Budget 2-16 and 11MP

Feedback from industry players about Budget 2016’s revision
● We talked to several industry players to get some feedback about the prime minister’s upcoming announcement on 28 Jan 2016 in relation to the revision or recalibration of Budget 2016. The overall findings were reassuring while some provided positive new information. General guidance was that high-impact and pro-growth projects should be safe. Also, the government remains supportive of selected private sector-funded projects. Overall, the risk of a big cancellation of jobs is low.
Awards season shifting to higher gear from 2Q16
● The tender and award timeline suggests 2Q16 as the point where project awards could start to gain considerable momentum. Industry players reminded us that YTD awards were for small- to medium-sized jobs and some newsflow has even indicated the emergence of new tenders. Likely awards beginning in 2Q16 are 1) initial Pan Borneo highway packages, 2) 1-2 larger value contracts from MRT 2, 3) MRT 2’s single largest underground package, and 4) private sector jobs, including Rapid.
80% of jobs are government-funded, more than 90% high-priority
● Government officials preliminarily indicated a 2.3% (RM6bn) cut to Budget 2016’s RM267bn total allocation, based on a lower oil price assumption of US$30/barrel vs. the original US$48. While postponement of selected projects is inevitable, our revisit of the distribution of projects under Budget 2016 shows that more than 90% of the jobs are high-priority. Industry players concurred that the risk of cancellation for these jobs is minimal. MRT 2, LRT 3 and Pan Borneo are among the safe ones.
New details for RM16bn Pan Borneo highway in Sarawak
● According to our checks, major contractors in Klang Valley in consortiums with Sarawak contractors that could be among the frontrunners for the Pan Borneo highway are IJM Corp, Sunway, Mudajaya, Gamuda and Bina Puri. This is positive as each of the packages could be worth RM1bn-1.4bn for each consortium. Although Sarawak contractors are likely to retain a 70% JV stake, their JV partners could undertake a larger portion of works due to size, expertise and capacity. 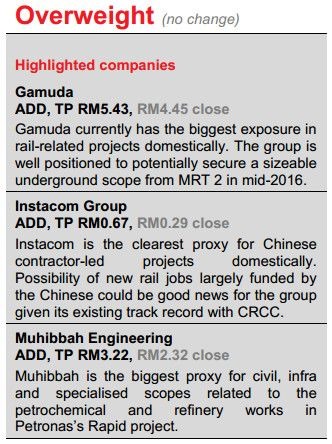 Overweight retained; better sector newsflow ahead
● Overall, we believe the recalibration of Budget 2016 is unlikely to be a huge negative for jobs. We continue to expect 2016 to be a more eventful year for contractors’ order book growth. The 2Q16 timeline for the award of MRT 2’s initial packages is intact, which should kick off the rollout of sizeable jobs. Maintain Overweight, with Gamuda as our top big-cap pick and Muhibbah Engineering as our preferred small/mid-cap pick.