We met up with the management recently and came out with enhanced assessment of the company. Prospects of the company is only to get better once its unrivalled facility in Pulau Indah comes onstream. We therefore re-introduce our FY15 and FY16 earnings forecast higher at RM25.0m (+15%) and RM29.7m (+10%) respectively plus a new target price at RM2.10. BUY. 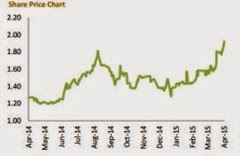 Pulau Indah factory. KFB will consolidate its operation from Shah Alam section 15 and section 16 to a new factory in Pulau Indah. The new factory will have a production capacity five times that of its existing plants in Shah Alam.

Markets tapped. KFB is constantly innovating its products for healthier and tastier food and beverages, and are now active in the United State, United Kingdom, India and the Middle East.

A regional player. Currently KFB derives 60% of its sales from overseas markets and we expect this to improve further once their capacity is enhance.

Earnings. KFB is expected to register net earnings of RM25.0m and RM29.7m for FY15 and FY16 respectively. Balance sheet is strong with net cash position of RM30.2m as at FY14. With steady cash pile, solid cashflows and benefits from the weak ringgit, we believe the company is able to support its regular dividend payments and CAPEX moving forwards.

View & Valuation. Revenue is expected to grow further upon completion of the new production site which will produce five times as much as the existing production figures. Hence, we have BUY recommendation at new target price of RM2.10, based on 22x PER over FY15 EPS. BUY.

Expansion mode. KFB owns production facilities at three (3) locations. Two in Malaysia and one in China. The factory in China currently supplies to the local market and sales are trending on a positive note. In Malaysia, KFB have been operating from two (2) manufacturing facilities in Shah Alam, Section 15 and Section 16. In 2013, KFB had acquired a 15-acre site in the Selangor Halal
Hub in Pulau Indah, Port Klang for further expansion plan. The new plant consisting of a two (2) storey frozen food factory (1st floor: flour based food, 2nd floor: food processing) and a three storey office.

New technology installed. The new plant in Pulau Indah will enable KFB to overcome space constrain at the two existing factories in Shah Alam. Upon completion of the new plant, KFB will consolidate the two existing facilities in Shah Alam to the new plant. The new plant will increase KFB efficiency as it enables KFB to centralise its Malaysia manufacturing operations. In addition,
the new plant will help KFB cater for the future expansion plans as such introduce products in new categories in the near future that could have huge potential in Malaysia and other countries, increase the production capacity for its existing products and reduce overall food manufacturing cost. Barring any unforeseen circumstances will be expected to complete by March 2016.

Meeting demand. Consumers are very mindful that maintaining a well balanced diet and keeping fit are fundamental to good health and longevity. As consumers are becoming more health conscious, KFB is continuously innovating its products to produce healthier and tastier food and beverages, to meet consumers' growing needs. Recently, KFB had launched a new brand in the USA to cater to a different segment of the market which had previously not been tapped by KFB’s existing distribution setup. KFB’s plan is to aggressively penetrate new market such as South America and Africa to develop its existing markets.