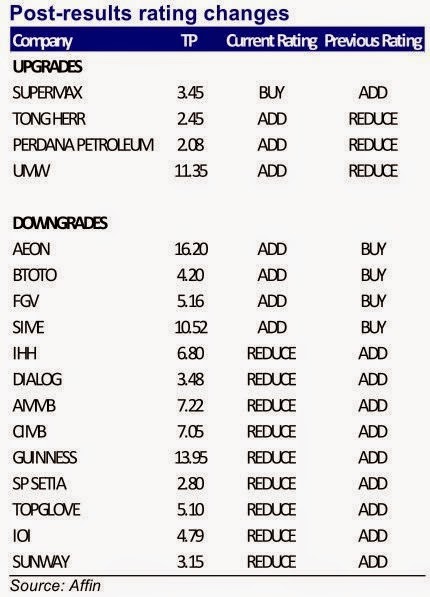 Ninth consecutive quarter of earnings growth in 1Q14
1Q14 core market earnings continued to improve yoy, recording its ninth consecutive quarter of growth, in tandem with the country’s firmer economic strength. Of the 18 sectors that we have coverage on, 13 of which recorded positive yoy growth, out of which, two sectors – technology and timber posted growth >100%, though due to its base effect. On the flip side, the consumer and consumer discretionary (auto) registered negative yoy growth, as consumption spending weakened, while the oil & gas, rubber gloves and transport sectors also disappointed. But in terms of meeting earnings expectations, the oil & gas and transport sectors clearly disappointed.

Another quarter of downgrades, the 13 th straight quarter. On a whole, the 1Q14 results season was another disappointment, as it marked the 13 th consecutive quarter of earnings downgrades. The stack ratio of companies missing our expectations against those exceeding our forecasts deteriorated to 3.7x (4Q13: 1.0x), reflecting that the number of underachievers has outpaced the outperformers. This also largely explains the larger number of rating downgrades (13 in 1Q14 vs 6 in 4Q13). However, in our top 10 BUY conviction list, the stack ratio was 1.0x, with IJM Plantation and MPI only reporting weaker-than-expected earnings. We nevertheless believe that these are momentary blips and have retained our BUY ratings on both these stocks, on expectations of improved earnings ahead. The companies within our top 10 BUYs that surprised on the upside were MISC and Inari Amertron.

CY2014E market growth lowered to 10.6%
Our CY14-15 market earnings have once again been trimmed, by 2.9% and 2.3% respectively. Key contributors to the earnings downgrades were the transport (larger-than-expected losses for both Mas and AirAsiaX), banks (lower-than-expected non-interest income for CIMB and higher credit cost ahead for AMMB) and plantations (due to lower production) sectors. Following the earnings cut, we reduce our CY14 market earnings growth forecast to 10.6%, from 13.4% as at end Feb 2014. Despite the earnings downgrade, CY14 earnings growth is still more robust than the 3.9% in CY13, largely underpinned by the oil & gas sector (due to Sapura Kencana’s Seadrill acquisition), higher CPO prices and the tariff hike in the utility sector.

A slight uptick in 1Q14 corporate Malaysia’s gearing
The aggregate indebtedness of companies under our coverage saw a slight uptick as at end 1Q14. The market’s net gearing level rose to 39.8% from 35.4% in 4Q13, largely as a result of an increase in debt levels in largely the construction, healthcare, media and property sectors. While the increase warrants some concern over repayments once interest rates normalise, we are of the view that Malaysian corporates are in a better financial position today than prior to the Global Financial crisis. We therefore see no significant risk to Malaysian corporates even in the event
of a policy rate hike in 2H2014.

Maintain Overweight and year end 2014 target of 1980
With the sombre set of 1Q14 earnings, valuations are now looking even more stretched, at 15.5x 2015 PE. We nevertheless believe that the lacklustre earnings performance is unlikely to have a significant dampening impact on the KLCI in the near term as: 1) domestic liquidity remains ample; 2) economic datapoints continue to be encouraging; and 3) capital inflows have recently
returned to the KLCI. Our end 2014 KLCI target stands at 1980 (based on 16x CY15 EPS. Key risks to our view include: 1) Government losing focus on reining in its fiscal deficit; 2) Developed markets reversing to an economic slowdown;and 3) US Fed rapidly tapering and also beginning to tighten.