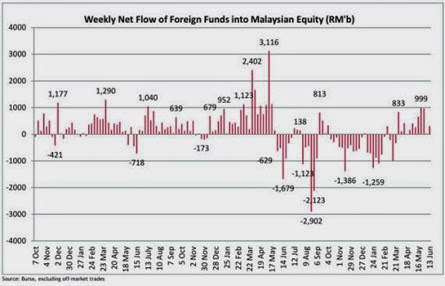 Surprisingly, despite foreign selling in Thailand and Indonesia, foreign investors remained net buyers of Malaysian stocks last week.
•  Foreign investors bought RM305.8m worth of stocks listed on Bursa last week, a signifi cant rebound from the RM20.1m purchased the week before. It was a decent amount, in view of the low volume and rising risks emanating from the oil market.
•  Last week’s inflow marks the eighth consecutive week of foreign buying of stocks in the open market (i.e excluding off-market deals) on Bursa. On cumulative basis, foreign investors remained net sellers of Malaysian stocks in 2014, but the net outfl ow as of last Friday had declined to only -RM1.8b. In 2013, Malaysia reported a net infl ow of +RM3.0b. 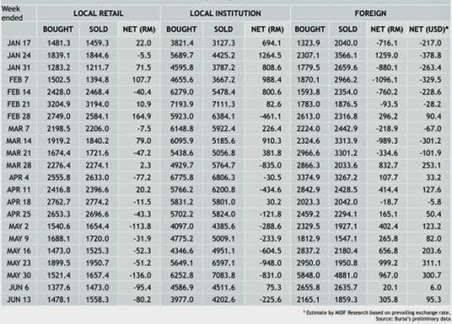 •  Foreign participation on the local bourse plunged to among its lowest in a week this year. The average daily foreign participation rate (average daily gross purchase and sale) on Bursa fell to only RM805m from RM1.1b the week before. While the school holiday season was among the main contributing factors, we believe waning global risk appetite towards equity also had a role to play for the decline in volume.
•  As expected, retail investors remained on the sideline, and offl oaded -RM80.2m worth of stocks.Indeed, retail investors had been selling for nine weeks in a row, refl ecting risk aversion. Participation remained depressed at RM607m, a slight increase from RM570m the week before, which was the lowest for the year.

•  Local institutions offl oaded -RM225.6m last week. Local institutions have been supporting the market, albeit passively, mopping up about RM1.9b this year. Participation plunged to its lowest in 2014 with average daily volume of only RM1.6b, compared with 1.8b the week before.