Hence prospect of reversal in liquidity flows may drag valuation lower...The equity markets around  the region reacted negatively to the acknowledgement despite no official announcement then on the matter (which eventually came almost a month later on 19 June). The apparent market nervousness is understandable as the QE3 taper may mark the apex of massive post-2008 eastward portfolio liquidity flows.  And the subsequent westward reversal will certainly be a drag to the region’s risk asset valuations going forward.

...as  reflected  by  the  recent  retracement  in  regional  indices. The  anxiety  was  reflected  by  the  circa  15% retracement in the regional benchmark MSCI Asia-Pacific ex-Japan (MSCI APxJ) during the ensuing month, before it recovered some ground. Our neighbouring peers, namely Jakarta Composite (JCI) and Bangkok’s SET (SET), behaved similarly to the broader MSCI APxJ. 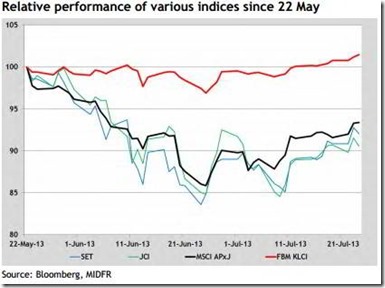 But  somehow  the  FBM  KLCI  was  least  affected  by  the  taper  talk...  The  performance  divergence  between  FBM KLCI and its other regional peers are rather glaring, and it seems decoupled with the rest of the region. While the peers are still teetering from the June selloff, the  local benchmark  has recovered fully from its relatively shallow retracement. It even subsequently recorded successive new all-time day close highs.

...despite its comparatively  lower earnings growth  prospects...The fundamental  justifications for the  FBM KLCI recent  outperformance  are  nevertheless  rather  elusive.  First  of  all,  if  we  look  at  the  consensus  2014  earnings growth estimates of the various indices, the FBM KLCI is expected to record the slowest year-on-year expansion at only  9.7%.  In  contrast,  the  MSCI  APxJ,  JCI  and  SET  are  all  expected  to  register  double  digit  earnings  growth  next year of between 12-19%yoy.

...coupled  with  subdued  earnings  sentiment...  Furthermore,  even the  current  year  earnings  sentiment  of  FBM KLCI failed to reflect the bullishness in its stock prices. Since early this year, the consensus earnings for 2013 have been  revised  in  an  almost  consecutive downtrend  fashion.  Consequently,  the  current  year  earnings estimate  for FBM KLCI now stands at 107.9, or nearly 3.8% lower than what it was in early January. 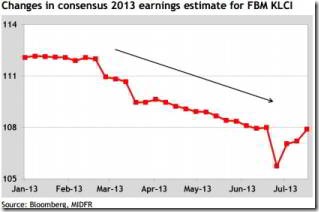 ...and relatively dearer valuation, both historically... Valuation expansion is the sure outcome of declining earnings against rising stock prices. Accordingly, the FBM KLCI saw it 2013 PER expanded from less than its longterm mean of 14.8x in mid-January to more than its +1-standard deviation (SD) of 16.4x as we enter the latter half of this year. This was despite the rather tepid earnings growth expectation until at least 2014. By historical comparison, based on its empirical data, the current high valuation is unlikely to be sustainable as it is not supported by commensurately high earnings growth in the visible future. 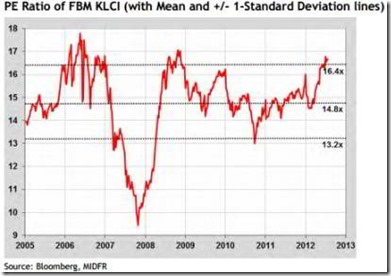 ...as well as against its regional peers. Moreover, by comparing to its peers, it is clearer that FBM KLCI is certainly not  cheap.  In  fact,  at  +1.2-SD,  its  valuation  is  the  highest  vis-à-vis  the  broader  MSCI  APxJ,  JCI  and  SET.  Even nominally, at current year PER of 16.7x, its valuation multiple exceed the others.

Liquidity is rendering the market “sticky” downwards. Since early this year until 22 May 2013, our local investors took out circa RM18.5 from the  domestic  equity bourse. In our  Strategy report dated 23 May, we stated  that “We are  sanguine  that  the  billions  of  ringgit  of  local  money  on  the  sidelines  may  sooner  rather  than  later  re-enter  the
market  especially  after  the  lifting  of  cloak  of  political  uncertainty...”  Since  then  on  until  23  July,  we  saw  net injections  of  local  money  totalling  RM3.9  billion  into  the  domestic  equity  market.  More  importantly,  from  23  May onwards,  the  level  of  average  daily  market  participation  (gross  purchase  and  sale,  a  measure  of  market  liquidity) among  both  local  and  foreign  investors  increased  by  21.5%  and  15.2%  respectively  against  the  prior  period  since early January this year. We reckon the returning local liquidity into our equity market may arguably have helped in the recent outperformance of FBM KLCI vis-à-vis other regional indices.

But  stay  true  to  fundamental  belief... As  we  remarked  earlier  in  our  Strategy  report  dated  10  May  2013,  “…the liquidity  equation  is  a  wild-card  that  may  upset  even  the  best  laid  out  fundamental  arguments.”  The  current valuation, while empirically stretched, has not exceeded the tail-end of its historical tolerance. But the history of financial  market  is  nonetheless  laden  with  episodes  of  fundamental  dislocation  when  valuation  gone  abnormally high, in most instances, due to prolong intake of excessive financial liquidity. Hence, if and when it happens, in all sobriety, be reminded of the notion that fundamental is a long-time trusted companion and liquidity a passing fairweather  friend.  As,  in  each  excesses,  the  euphoria  soon  (-er  or  later)  ended  and  the  market  duly  reverted  to  its fundamental senses.

...and manoeuvre the market waves, only if technically competent. Having said that, in the meantime, the “long cash  squeeze”  on  those  underinvested  can  be  asphyxiating.  Thus  to  avoid  the  feeling  of  being  suffocated  in  a liquidity-driven  but  fundamentally-dear  market,  we  suggest  catching  a  breather  in  technical  analysis.  Its  charting technique,  if  properly  used,  is  empirically  quite  useful  in  assessing  market  momentum  as  well  as  pinpointing  its direction, target and reversal. Nonetheless, we ourselves are not a major exponent of the technique.

Expect  another  round  of  market  reaction  upon  actual  commencement  of  QE3  taper. The  liquidity  impact  of impending  QE3  taper  on  the  local  market,  FBM  KLCI  in  particular,  has  so  far  been  more  muted  than  earlier expected. It is conceivably due to (i) the returning local liquidity, and (ii) the follow-up statements by the US Fed on QE3 taper, which help soothed markets edginess. In spite of this, recall that the actual QE3 liquidity rollback is expected  to  begin  only  after  mid-September  this  year.  Hence  we  can  expect  to  see  a  fresh  round  of  market reaction thenceforth, or even slightly earlier.

Maintain FBM KLCI 2013 year-end target of 1,800 points. As outlined above, the FBM KLCI seems decoupled with the rest of the region and is currently trading at both relative and absolute premiums to its past and peers. But as repeatedly  alluded  to  in  our  past  Strategy  reports  (e.g.  dated  22  January  2013),  the  empirical  market  behaviour dictates that, “While the local market performance may temporarily decouple from the rest of the region, it would soon re-track the broad regional trend direction.” We reiterate our FBM KLCI 2013 year-end target of 1,800 points, equivalent to 16.7x current year earnings or +1.19SD (15.2x next year earnings or +0.25SD) above its 7-year average from 2006-2013.