ANOTHER TURBULENT WEEK AHEAD BUT EXPECT KLCI TO REMAIN SUPPORTED


•  Foreign selling on Bursa continued for the fourth consecutive week. Foreign funds sold Malaysian equity in the open market (i.e excluding off-market deals) last week amounted to -RM0.91b, much lower compared with -RM1.68b the week before.
•  Although  on  a  weekly  basis,  the  size  of  the  outfl ow  was  lower,  the  intensity of  selling  actually increased  in  the  last  three  days  of  the  week.  The  week  started  on  a  calm  note,  after  the  postCrisis record outfl ow the week before. Foreign investors even started buying (on net basis) again on Tuesday. The selling started on Wednesday, ahead of the Fed’s FOMC meeting. It increased on Thursday and by Friday, the net sale amounted to -RM586.9m, one of the heaviest foreign outfl ow
in a single day reported by Bursa.
•  Despite the heavy outfl ow in the last four weeks, the overhang of foreign liquidity on Bursa remained a risk in the event of a “disorderly” exodus. This risk has decreased in regional peers, where the worst  in  foreign  withdrawal  is  likely  to  be  in  the  past.  For  example,  there  has  been  a  complete reversal  of  foreign  fund  infl ow  for  2013  in Thailand  and  Indonesia.  In  contrast  only  an  estimated 32%  of  the  cumulative  foreign  infl ow  to  Bursa  in  2013  has  been  withdrawn,  leaving  +RM14.9b  or +USD4.9b  outstanding.  The  corresponding  liquidity  overhang  for  foreign  fund  cumulative  inflow from January 2011 is USD10b, about the same as that outstanding in the TIPs markets.
•  Foreign  participation  rate  (average  daily  gross  purchase  and  sale)  rose  to  RM1.4b,  the  highest  in three weeks, indicating increased propensity to sell.
•  The  retail  market  remained  surprisingly  positive.  Retail  investors  snapped  up  shares  last  week amounted  to  +RM117.4m.  However,  we  detect  some  agitation  as  participation  rate  fell  to  only RM1.1b, the lowest in seven weeks.
•  The KLCI would have crumbled if not for the local institutional buying support. Local institutional investors mopped up +RM792m last week.

below: Weekly Net Flow of Foreign Funds into Malaysia (click to enlarge) 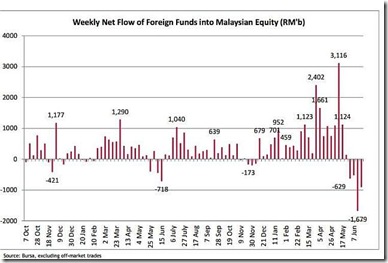 ANOTHER TURBULENT WEEK AHEAD...
•  We  expect  another  turbulent  week  ahead  in  global  equity  and  any rebound  will,  at  best,  be  transitory.  Expect  a  strong  resistance  on account of profi t taking.
•  Situations around the world after the Fed announced that it is likely to  “taper”  its  bond  purchase  have  been  rather  chaotic.  In  China, the  announcement  has  triggered  a  liquidity  crunch  at  the  banks,  a situation  which  will  be  closely  monitored  this  week.  The  Shanghai Interbank Offered Rate (SHIBOR) overnight rate, hit a record high of
13.44%  last Thursday. Although  China  has  the  wherewithals  to  avert a  liquidity  crisis,  the  Government’s  inertia  in  coming  to  the  rescue  is  making  investors  extremely  nervous. The  Government  appears  to  be  bent  on  slowing  down  asset  price  infl ation,  and  may  be  “teaching”  the  more
aggressive banks a lesson for contributing to liquidity supply overfl ow.

BUT EXPECT KLCI TO REMAIN SUPPORTED
•  In  a  survey  of  economists  by  Bloomberg immediately  after  the  Fed’s  announcement,  44% of  the  respondents  expect  the  Fed  to  trim  itsmonthly   bond   purchases  to  USD65b  in September  (from  USD85b  currently)  and  end the buying completely by June 2014.
•  However,  the  majority  of  the  economists  expect  the Fed  to  start  raising  interest  rates  only  in  2015.  On  this score, there is still hope for the local market to resume its  “secular”  uptrend  after  the  current  upheavals  have settled.
•  We note that the KLCI remained well supported last week and  stayed  above  the  50-day  moving  average  (together with  FBM70).  The  strategy  now  is  to  switch  to  quality names and defensive plays.