In line with our expectation, inflation rose for the third straight month. The increase in inflation was partly due to higher transport prices added with firm increase in food prices. Looking at the segmentation of goods and services, we found inflationary pressure was driven by non-durable goods and supported by the firm increase in the prices of services.

We expect upward inflationary pressure to remain in the coming months, mainly coming from demand-pull on the back of healthy job market and strong economic fundamentals and cost-push from the rationalization of the subsidies which is more likely to take place in 2H2013.

Nevertheless, we reiterate our view that BNM we likely maintain the Overnight Policy Rate at 3.00%, placing a low probability of 15% for a potential rate hike in 2013. Meanwhile, we have ruled out on the possibilities of rate cut in view of the widening negative gap between money demand and money supply.
•  Inflation rose for the third straight month: Although headline inflation rose for the third consecutive month, it is still below the 2.0% level for the 13th consecutive month. In the month of March, inflation rose by 1.6%y-o-y, from 1.5%y-o-y in February. March’s inflation fell in line with our estimation. Hence, overall average headline inflation for 1Q2013 is 1.5%.
•  Drivers of inflation:We found the food prices grew at the same pace as in February at 3.3%y-o-y, while the prices of housing/utilities/fuel grew at the same pace as in February by 1.3%y-o-y in March. The prices of alcohol/tobacco rose by 2.0%y-o-y for the third consecutive month. Meanwhile, the transport prices rose in March by 1.0%y-o-y from 0.4%y-o-y in February. It is the biggest increase since April 2012.

•  Core-inflation rose:In tandem with the headline inflation, we found the core-inflation that focuses on non-food items rose in March. The core-inflation gained by 1.0%yoy in March from 0.8%yoy in February was partly
due to higher prices of transport.
•  Non-durable goods prices rose in March: Looking at the segmentation of the goods and services, we found the prices of non-durable goods rose by 2.2%y-o-y in March from 2.0%y-o-y in February. Meanwhile, prices from the services grew at the same pace as in February by 1.8%y-o-y. As for the prices of durable and semi durable goods, it fell by 1.2%y-o-y and 0.4%y-o-y respectively in March.
•  Expect inflation to increase in 2013:We expect upward inflationary pressure in 2013. It is poised to come from both demand and cost side of the equations. On the demand-side, we believe the healthy labour market and strong economic fundamentals will continue to boost household expenditure at a healthy pace. On the cost-side, the upward pressure will come from the rationalization of the subsidy program which is expected to kick-start sometime in 2H2013. Our inflation target for 2013 is 2.5%. 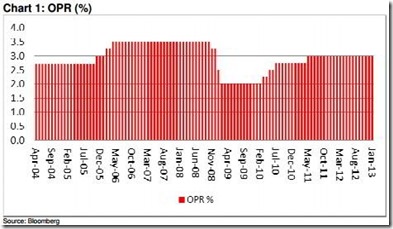 •  Policy rate to remain intact at 3.00%: Although inflation is inching up, we reiterate our view that there is no urgent pressure for BNM to re-price the policy rate upwards. When we looked at the other macroeconomic data like industrial production, exports and liquidity, we are of the view that BNM will continue to hold the Overnight Policy Rate (OPR) at 3.0% in 2013. We have placed a very low probability of 15% for BNM to raise the policy rate in 2013, and have ruled out any rate cuts at this point in time in view of the widening gap negative between money demand and money supply.