MALAYSIA
• Foreign investors continued to buy Malaysian equity last week although the rate of absorption eased. On a net basis, foreign investors BOUGHT +RM0.71b NET in the open market last week (see chart below), compared with +RM1.12m the week before. 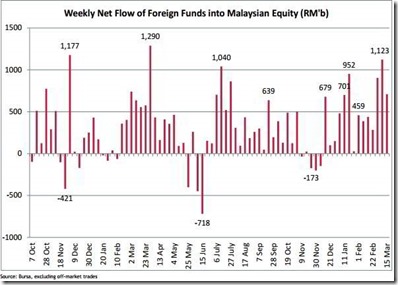 • On a slightly disconcerting note, foreign investors turned net seller on Friday, the fi rst time in 17 trading days, on heightened participation rate. Otherwise, strong foreign buying momentum (net absorption of >RM200m per day) from the week before continued on Monday and Tuesday, tapering off on Wednesday and Thursday.
• So far this year, foreign investors have already bought +RM6.4b net of Malaysian equity compared with +RM13.7b in 2012.
• Foreign participation rate continued to rise last week, but much of it was attributable to Friday. Average daily gross purchase and sale (i.e participation rate) was RM1.28b, compared with RM1.03b the week before. On Friday, gross trade surged to RM2.34b, the highest since May 31 last year. The sudden surge in foreign participation amid selling sentiment is ominous for the market.
• The selling by local retail investors eased last week although they remained net sellers for the 15th consecutive week. Retail selling amounted to only RM196.1m, compared with more than RM300m in the preceding three weeks. Participation rate stayed relatively unchanged at RM614m compared with RM625m the week before.
• Local funds supported the market on Friday and are likely to do so this week if foreign selling intensifi es. However, for the week, local fund managers continued to offl oad, selling -RM513m net, compared with -RM739m the week before. Participation rate rose to RM1.76b, from RM1.67b. Gross trade for the year until Mar 15 was RM82b, -1.8% lower compared with the same period in 2012.

THE WEEK AHEAD
MARKET TAKING A BREATHER
• At the half-way mark, the month of March has proven to be extremely unpredictable. We wrote about rising optimism last week, and the market lived-up to the signs as the KLCI rose to the week’s high on Tuesday at 1664.39 points (intraday). That was the highest in about two
months. 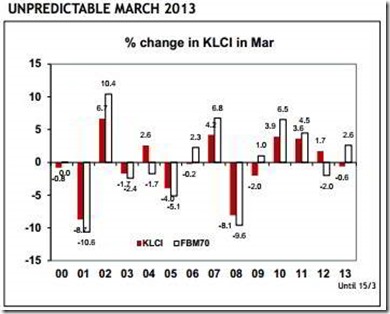 • The optimism proved not sustainable, at least for the KLCI. Until Friday, the KLCI had declined -0.6% in March. However, the FBM70 remained in the greenzone, gaining +2.6% (see chart). Such contrasting performance is one of the reasons why March is turning more unpredictable in our opinion.
• We expect the market to open this week on a slightly weak note as the KLCI fell back to under the 200-day moving average on Friday (see chart). There is also heightened expectation that the General Election will be announced soon. Regionally too, sentiment is less bullish as some markets have run up during the year.
• The expected weakness in the equity market this week should also be manifested by the weaker ringgit, which lost ground against the dollar on Friday. The U.S CPI for February rose +0.7%mom, the highest in 4 years, due to higher gas price. inflationary pressure remained benign (excluding food and energy, CPI decelerated to 0.2% from 0.3% in January), there is increasing expectation that the Fed will not keep interest rates depressed for a longer time than is necessary.
• The all-time KLCI high of1699.68 points recorded early this year is unlikely to be challenged in the forseeable future based on current market conditions.

SECTOR FOCUS
• We reiterated out “Positive” plantation sector recommendation last week on account of rising exports and falling inventory. On Friday, the Customs Department announced that the CPO export tax for April remains unchanged at 4.5%, as expected. This is lower than Indonesia’s rate of 10.5%.
• Lower export duty is expected to attract higher demand, particularly from India. In February 2013, palm oil export to India accounted for 13.4% of Malaysia’s palm oil export. This is expected to bring down the inventory
level to 2.0mmt, supporting CPO price to a year-to-date average of RM2,600pmt by June 2013.
• On this optimism, we would recommend buying on weakness if plantation stocks were to retrace this week, especially should the dollar’s rise were to intensify.