REAFFIRMATION OF VIEWS OVER DIRECTION OF THE MARKET
FBM KLCI lagged due to election concern...  In our earlier report, we demonstrated that the FBM KLCI index performance so far this year has materially lagged other markets which are expected to register similar level of forward consensus earnings growth performance. We opined that the abysmal forward earnings growth-adjusted performance can be attributed to investors’ concern over the outcome of the impending 13th general election (GE13). We also calculated that a ‘normalized’ FBM KLCI should currently be traded at circa 1,730 points level.

…but will henceforth normalize at higher levels. We reiterate our view that the market may have over emphasized the election risk as we believe that the likeliest of result is that status quo would remain pursuant to the upcoming GE13. Our conclusion is conformable to the poll results by Merdeka Center for Opinion Research vide its latest report dated 26 February 2013, which show (i)the Prime Minister’s overall satisfaction rating has improved by 15%-points to 61% in January 2013 from only 46% as recorded in March 2008, and  (ii)56% of the latest survey respondents believe the country is moving in the right direction as compared to mere 45% in the months following the GE12 in March 2008.

Our reading of the latest poll numbers suggests that the pendulum of the so-called majority swing voters is hitherto more in favour of the ruling coalition. Consequently, we are sanguine that the FBM KLCI performance will normalize at higher levels pursuant to the GE13.

WHERE WILL THE FBM KLCI GROWTH COME FROM

YTL Corp topped the nominal return prospect.  Judging by the nominal percentage difference between the current versus consensus target prices of FBM KLCI constituents, the market expects YTL Corp to generate the highest price return of 19.0% during the next 12 months. This is to be followed by Hong Leong Financial, Genting Malaysia and Tenaga Nasional with target price returns of 18.5%, 14.9% and 14.0% respectively. Nonetheless these nominal returns per se are not necessarily reflective of the source of FBM KLCI growth going forward 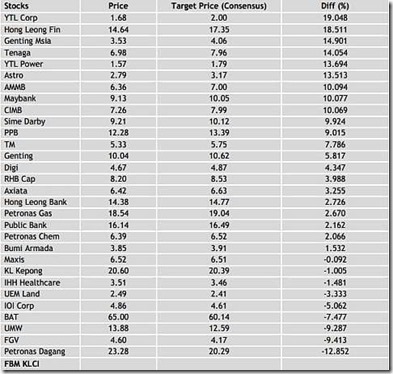 Four stocks make up nearly two-third of FBM KLCI target growth.  Our analysis shows that circa 63% of the FBM KLCI consensus target rise of 87.5 points is represented by only four stocks, namely Maybank, Sime Darby, CIMB and Tenaga Nasional. These are among the safer, must-have stocks with most institutional investors. Based on market data, the local institutional investors have been cutting their exposures in the local equity market by more than RM3 billion since early this year alone. When their net selling tide turns, as we believe it eventually will, the named stocks would arguably be among their safer add-on bets.