Home » The Long and Short of Obama Win

The Long and Short of Obama Win

End of uncertainty: The end of the U.S presidential election has brought an end to uncertainty over leadership in the most influential country on earth. There is now better visibility with regard to issues such as U.S government finance and its external policies towards Iran and China.

Knee-jerk reaction of Wall Street unsurprising and expect knock-on effect on Bursa: Another four years of President Obama has short and long term repercussions on Malaysian equity. Immediately, there should be concerns whether or not last night’s selloff on Wall Street will have a knock-on effect on Bursa. We believe it will because risk aversion towards equity is currently globe-wide. But we expect it to be transient. In our opinion, western markets disastrous reaction (see table) to Obama's win is knee jerk. It is unsurprising given that Wall Street has put its weight behind Romney.

Short-term pain for long-term U.S gain: Smart money will remain  longfor the long-haul. We are positive on the win as it means continuity in policies. No doubt that the immediate challenge facing Obama is the fiscal cliff. However, the precarious position would not have vanished even if Republican had won. Obama’s win is painful for the short-term funds speculating on Republican’s win to maintain the tax cuts on the top tier income earners

Trouble for Asia if the U.S can get its house in order: Over the long term, we are more circumspect of Obama's win as we are of the opinion that the Democrats would manage the economy better than the Republicans. After all, the Labor market is healing and the equity market has been on a decent run. A stronger U.S economy may mean trouble to Asian economies which are currently sitting on a huge overhang of foreign liquidity in their systems. It may signal a long-drawn reversal in the flow of fund. If the outlow is orderly, it will not be disruptive to the economy. However, the chances are money will be scrambling towards the exit door at the first trigger of an exodus. The local authorities would therefore do well in preparing for the eventuality

•  Exchange rate: Expect the dollar to stay weak on account of QE3. Mitt Romney loss means continuity if the programme as he has already made it explicit that he would not reappoint Bernanke to a third term in 2014. However we expect the USD/RM exchange rate to be rangebound as Bank Negara is likely to intervene to ensure that the exchange rate is not disruptive to trade.
•  Interest rate: We expect the Federal Reserve to continue to receive the support of the White House with the open-ended QE3 programme. This means that interest rates will likely remain low throughout 1H13, but the
risk of a rate hike should rise in 2H13 as the economy gains traction. Unemployment rate has been below 8% for two consecutive months now.
•  Commodities: Obama is seen as a more committed president when it comes to climate change. This will benefit the renewable energy industry and energy efficient automotive industry. Obama is also spearheading
efforts to reduce U.S dependence on oil imports and has boosted domestic production of oil and gas. On these scores, it is evident that Obama’s reelection will be negative for oil price and commodities in general. Hence, equity could be under pressure given its strong correlation will oil price. 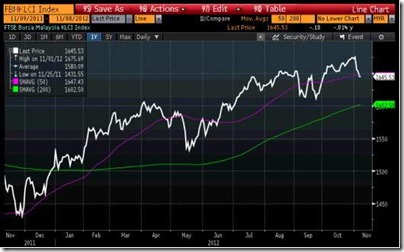 Challenging few days for the KLCI:Challenging times beckon for the KLCI, which broke the 50-day moving average yesterday to close at 1645 points (see chart). The long-term support is the 200-day moving average of 1601 points. We do not expect this support to be in danger of being broken in the immediate term. However, any retracement in the KLCI would present a good opportunity for funds to accumulate as we expect the selloff on Wall Street to be transient. The market would realize that Obama’s reelection means continuity which is important for the long-term prospect of the economy. Buy at 1630 or below, which is about 1% retracement.