Home » Funds returning to Asian equity, but Malindo has to wait

Funds returning to Asian equity, but Malindo has to wait

MARKET SNAPSHOT
• After two weeks in a doldrum, the global equity markets rose strongly last week. Markets in the West staged its biggest rally this year.
• The Dow Jones Industrial Average and the S&P500 jumped +3.4% and +3.6% respectively in a 4-day Thanksgiving week, only the second week it gained >3%. Optimism rose after President Obama expressed confidence that the deadlock with Congress over the budget can be resolved. The U.S kicked off its year-end holiday sales season on Friday (as known as “Black Friday”) amidst optimism that retail sales will be strong.
• However, focus was on European markets which led the rest of the world in the weekly performance. Germany’s CAC and DAX led the table with a robust gain of +5.6% and +5.2% respectively. Business confi dence in Germany rose in tandem with indications that Eurozone’s manufacturing sector has passed its trough. The loss of France’s AAA rating was evidently discounted and did not have much bearing on the market.
• Asian markets had a mixed week. Japan’s Nikkei continued its strong rebound, joining the rest of the countries in the major industrial world in an apparent renaissance. North Asian markets in general had a positive week, but Emerging South East Asian markets, with the exception
of the Philippines were clearly outpaced.
• The FBM KLCI lost -0.9% and was rooted at the bottom of our ranking table. The market clearly bucked global trend. For the year until Friday, the KLCI gained only 5.5% and lost position to the Dow Jones (see chart). It closed at 1614.32

TRACKING MONEY FLOW
• Foreign funds made a swift comeback to Asian markets. Based on preliminary data from our proxy markets, we estimate an aggregate net INFLOW of foreign equity investment to the seven markets that we track (Korea, Taiwan, Thai, Malaysia, Indonesia, Philippines and India*) amounted to +USD1.3b, compared with an outfl ow of -USD1.1b the week before.
• The biggest winner last week has to be Thailand which raked in USD386m, the second highest this year after the USD420m haul in the week ended February 10. Foreigners had been selling Thai stocks for four consecutive weeks prior to that last week. The Philippines also had a good week, getting USD162m, the highest in 19 weeks.
• No particular market felt the brunt of selling. However, Malaysia and Indonesia (Malindo) were not on investors’ radar screen last week, as there was marginal net outfl ow from the two countries.
• The overhang of liquidity in Asia remained high. An estimated USD42.5b of foreign liquidity had moved into the seven Asian markets aforementioned this year until last Friday. In 2011, there was an aggregate net outfl ow of an estimated -USD13b.

below: Weekly Net Flow of Foreign Fund Into Equity (click to enlarge) 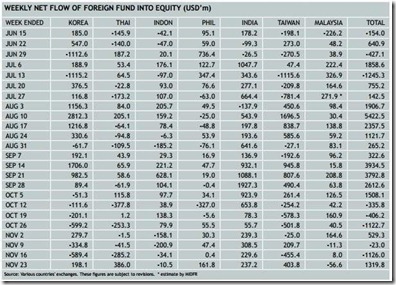