Home » Malaysia’s Foreign Fund Inflow and The Week Ahead

Malaysia’s Foreign Fund Inflow and The Week Ahead

MALAYSIA
• The inflow of foreign funds to Bursa Malaysia last week remained sizeable as foreign investors BOUGHT  Malaysian stocks for the seventh consecutive week. On a net basis,  foreign investors BOUGHT +RM308m (see chart below).
• For the year until last Friday, the cumulative net inflow of foreign fund to Malaysian equity was +RM9.5b. It was much higher compared with only +RM1.9b for the entire 2011. Since Jan 2010, cumulative net purchase of Bursa-listed shares by foreigners amounted to RM26.6b.
• Foreign funds were net buyers every single day last week, except on Wednesday. It was a rarity as foreign investors had been net buyers daily since 29 June. The rate of participation however fell -7%. Foreign daily  average gross trade (purchases + sales) declined to RM857m. This is considered moderate.
• Local retailers continued to be net sellers for the tenth consecutive weeks. Net sale dropped to -RM62m, the lowest in seven weeks. Participation rate also dropped significantly to RM747m. It appears that local retailers are slowly retreating to the sideline again after five weeks of moderate trading.
• Local  institutions continued to take profi t for the seventh week running. Net sale amounted to -RM246m. Daily average participation rate of local institutions stayed elevated at RM1.67b. 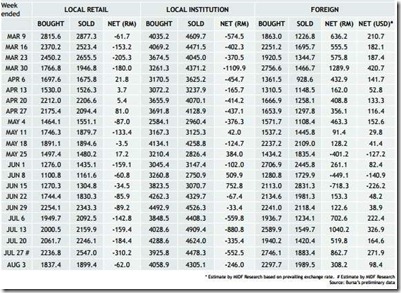 THE WEEK AHEAD - A POTENTIALLY VOLATILE WEEK HAS PASSED
• The crossover to  a new  month has always been tricky in view of the slew of market-signifi cant economic data due to be released. China’s PMI for July came in at 50.1, lower than 50.5 expected, and was the lowest in 8 months. It dampened the market slightly, but the fallout could have been worse. The corresponding U.S PMI was 49.8, slightly higher than 49.7 the month before. It was also below expectation, which was 50.2. The fact that it was sub-50 means that the U.S manufacturing sector continued to contract for the second consecutive month. These two releases alone could have dragged the global equity market in a volatile downswing.
• The saving grace was the U.S non-farm payroll. The 163k net new jobs created in July came in much stronger than the 100k expected and the market responded in robust fashion on Friday. Overall, therefore, the passing of last week was positive for the market. 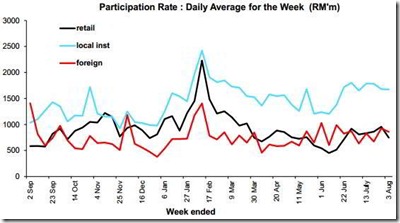 A CLEAR WEEK AHEAD
• Other than the weekly initial jobless claim in the U.S, there is no game-changing statistics expected this week.
• The earnings reporting season in the U.S has also effectively passed by without any irreparable damage. Indeed, Bloomberg’s stockwatch shows that 67.9% of companies that have reported their 2Q12 earnings have exceeded expectations, with 21.2% disappointing.

KLCI TO STAY IN POSITIVE TERRITORY
• Bursa’s 2Q12 earnings report season will peak in the second half of this month. Among the companies expected to release their results this week are Unisem, JTI, Hartalega and Sunway REITs. Unisem’s numbers should be of interest as it is a bellweather for the country’s E&E sector. We expect a rebound to the black for Unisem after the loss in 1Q12. Unisem is a benefi ciary of the inventory rebuilding process by its clients.
• The strength of the ringgit of late is a positive market indicator. The ringgits tested its 200-day moving average resistance of 1USD/RM3.11 last week. Although it last traded at RM3.1296, there is possibility that the ringgit may test the aforementioned resistance again this week as foreign capital continued to fl ow strongly into the system. The central bank is also expected to support the ringgit ahead of the festive season. The KLCI has always been positively correlated with the ringgit.