October MPOB statistics were within expectations with stronger exports both m-o-m and  cumulatively.  Going  forward,  we  expect  that  production  to  continue  doing  well and  exports  to  pick  up  further  towards  year  end.  We  do  however  note  that  the severity  of  a  La  Nina  and  supply  concerns  in  the  soybean  market  could  be  re-rating catalysts for the sector. Maintain Neutral. 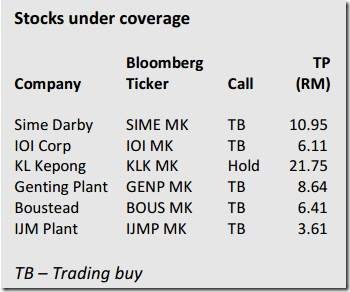 Exports: Up 19.2% m-o-m, 10M11 vs.10M10 up 6.0%
Exports reached record highs in October, mainly driven by Pakistan (up 80.2% m-o-m). We believe this is due to price sensitivities towards the widening price discount between CPO and soybean oil (Figure 9). Exports to EU and US also saw m-o-m increases of 23.5%  and 12.1% respectively. On the downside, exports to Egypt shrank 67.1% m-o-m.
While exports to China have been slow possibly due to the harsh winter conditions making CPO storage difficult, we expect exports to rise again towards the end of the year as pre-stocking begins for Chinese New Year in January.

Inventory: Slight decrease of 0.9% m-o-m
The rise in exports coupled with the increase in production has caused inventory levels to remain flat, closing at 2.1m mt.
We  expect  exports  to  continue  to  be  strong  along  with  production  and  that inventory figures will close below 2m mt by year end.

On weather and soybeans
The Southern Oscillation Index (SOI) indicators are currently pointing towards the early stages of a La Nina event as conditions have strengthened slightly over the past fortnight. However, current outlooks suggest that it is likely to be considerably weaker than the event in 2010/11.
The downward revision of US soybean crops together with the risks of a La Nina event  hampering  South  American  crops  suggest  soybean  supplies  are  likely  to tighten going forward. Chinese soybean imports are also expected to increase in 2012. This will keep soybean, and in turn CPO prices, strong.

Maintain NEUTRAL
Our CPO ASP is RM3,200/mt for 2011 and RM3,000/mt for 2012.
The adversity of the oncoming La Nina is an event to watch and may be cause for a re-rating catalyst for our CPO ASP in 2012. Besides that, further deterioration of soybean supplies could also take CPO prices higher next year.