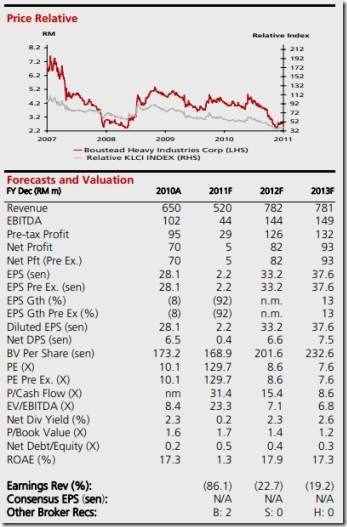 Provisions for commercial projects.  We understand 2H11 results may be hit by provisions for its commercial projects, possibly resulting in losses in 3Q11. BHIC has yet to recognise c.RM40m of provisions mainly for projects from Swire Pacific (2 accommodation barges) and Sealink (2 chemical tankers). This will be mitigated by still lucrative government contracts which make up 90% of its current RM1.2bn outstanding orderbook, and it managed to charter out a tanker to Japan’s Asahi Tanker for 1 year plus 1-year extension option to potentially reap RM6.6m.

Delays in RM7bn OPV contract.  The 2nd batch of OPV contracts is long overdue since the LOI was issued in Oct10, but we believe BHIC has bagged it. We understand the delay was due more to technical issues relating to equipment. And since the contract will have 50% local content to stimulate the economy, BHIC may be an election play to secure the massive project, which will underpin its long-term earnings visibility.

Slashed earnings. We slashed FY11-13F earnings by 86%/23%/19% after accounting for the delayed OPV contracts, provisions for commercial projects, and lower contract win assumptions. BHIC is currently bidding for RM500m worth of O&G and shipbuilding contracts that may be awarded by 1H12. It is also finalising a comprehensive ISS
contract for the Malaysian Navy that will give strong recurring income.

Maintain Buy. We cut our TP to RM4.00 pegged to 12x FY12 EPS after the earnings cut. Although there could be a negative knee-jerk reaction to the provisions, we believe the 2nd batch of OPV contracts will be a major rerating catalyst. There could be further upside to our RM7bn value assumption.