FBM KLCI: Valuation against regional markets (as at 30 June 2017)

• FBM KLCI valuation cheaper vis-à-vis international markets. Against other international markets, the FBM KLCI is trading at a nominally lower SD to the PER valuation. It must however be noted that these international markets are at different phases of the economic cycle. As their economies are either recovering or are just about recuperating, it is not unusual for the SD to the PER valuation yardstick to hover substantially above the parity mark. But in contrast, most of the emerging economies are arguably at advanced stages of the growth phase or even entering into the maturity phase of the economic cycle.

FBM KLCI: Valuation against international markets (as at 30 June 2017)

Despite prevailing tightening bias, valuation remains at upper historical band… Pursuant to Brexit in June last year, the SD to the PER of FBM KLCI began to gravitate towards +1SD (amid intermittent pullbacks) arguably due to expectation of further monetary accommodation by world’s major economies. Recall that the Brexit panic was short-lived as central bankers worldwide avowed their willingness to conduct more monetary stimulus to cushion any shock. However, at prevailing juncture, the valuation parameter remains at the upper band levels despite the shift towards a tightening bias in the major economies. The US Fed is projecting another rate hike later this year after the second hike in June and also highlighted that it may begin balance sheet reduction this year. Similarly, the ECB stood pat on its monetary policy and hinted to tighten monetary policy while the BOJ is already planning to withdraw its stimulus program. 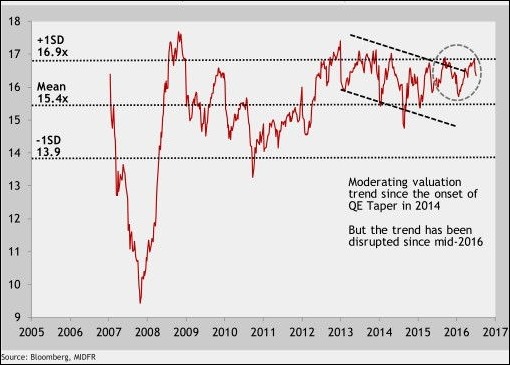 • …supported by favourable liquidity flow into regional markets. The momentum of foreign funds into regional markets, and Malaysian equity in particular, remains strong in the second quarter amid Wall Street experiencing a series of record highs. As a result, foreigners were arguably prompted to diversify away from the US market as their risk appetite got higher. It is notable that more than 30% of the total net outflows from Malaysian equity in the last three years have been reversed by the cumulative year-to-date inflow of more than RM10 billion.

• Despite multitude of factors engendering sentiment-driven volatility… In the shorter term, market sentiment may be influenced by external geopolitical risks such as (1) possibility of a flare- up in the feuds between Saudi-led Arab nations against Qatar, (2) the US and its allies taking a more confrontational stance towards North Korea, as well as (3) political instability in the UK pursuant to the rather indecisive June election and its impact on the Brexit negotiations with the EU. Domestically, while the parliament will be automatically dissolved only in June next year, the 14th general election is rumoured to be held as early as in 3Q2017. On this score, looking at the previous general election in 2013, while price movements were rather muted prior to the election, however, the market staged a post-election relief rally as the uncertainty over the nation’s leadership was removed. Hence, if the 14th general election were to be held in 3Q17 and the nation’s leadership remains with the incumbent, we can expect another post-election rally.

• …the underlying trend of FBM KLCI shall continue to be dictated by… Despite the ever present ‘noises’ from short-term price volatility (due to market sentiment and other situational issues), observations of the trend between earnings and price are conclusive with regard to the nature of their secular direct relationship. Hence, in the longer term, our assessment on the likely trend path of the FBM KLCI is highly dependent on its expected earnings growth performance during the coming periods.
• …the pace of recovery in corporate earnings growth… On that account, the (Bloomberg consensus) FBM KLCI earnings are estimated to grow by 5.2%yoy in 2017 and to grow further by a projected 5.9%yoy in 2018. Thus, amid the ever present market ‘noises’, we foresee an upward bias in the trajectory of FBM KLCI going forward. …while the downside restricted by improving macro outlook. In addition, the outlook for Malaysia’s economy remains sanguine with our in-house GDP growth estimate for this year being revised upward to 5.1% (from 4.9% earlier) supported by robust external performance and resilient domestic demand. Hence we foresee a restricted downside to the equity market. Nevertheless, as earlier stated, we remain mindful of intermittent cyclical pullbacks that may take place as a result of transient situational issues.
• Earnings momentum rising since mid-2016… The momentum of FBM KLCI earnings has been on the rise since its trough in the middle of 2016. So far this year, the 12-month trailing earnings remain on an upward path and it has now risen to 105.3 points level pursuant to the recent 1QCY17 results season.
• …and given prospect of further recovery… As per the (Bloomberg consensus) FBM KLCI 2017 estimate of 106.6 points, the earnings integer is expected to increase further, albeit by merely 1.3 points (from 105.3 to 106.6), during the remainder of this year. We can thus imply that the market is expecting the pace of earnings recovery to taper off rather drastically in the quarters to come; a view which may be at odds with the expectation of still upbeat macro performance going forward (i.e. higher GDP growth target of 5.1% this year). Hence we believe there is a better than even chance for the prevailing 2017 earnings estimate to be tweaked upwards in the coming quarters. 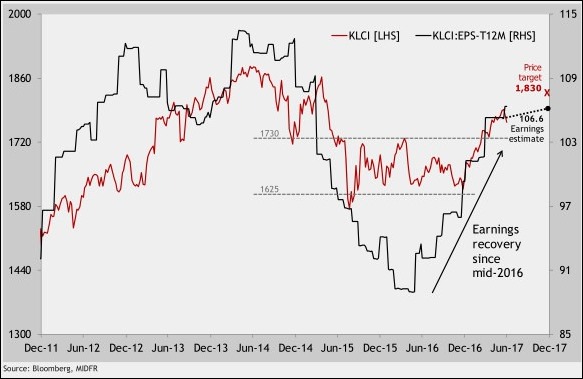