Foreseeing more catalysts around the corner

■ Muhibbah kicks off 2017 with a RM438m infra contract win from Qatar.
■ This supports the group’s renewed optimism at our Malaysia Corp Day event last
week.
■ 2017’s tender book stands at RM5bn of which RM4bn are marine/infra contracts.
■ We expect 1H17 to be a period of good newsflow for domestic and overseas jobs.
■ Muhibbah remains our preferred small/mid cap pick (9-10x CY17-18 P/E) 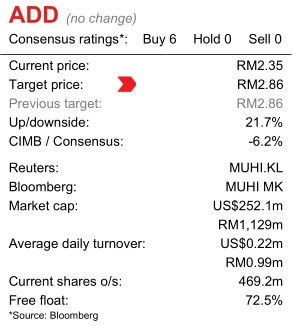 Lands an infra contract in Qatar
49%-owned Muhibbah Engineering Middle East LLC has won a contract from the Economic Zones Company of Qatar (Manateq) to undertake the construction of roads and infrastructure works at Um Alhoul Economic Zone (QEZ-3) Phase 2.1 (Portion 2A, Marine Cluster) for a total contract sum of RM438.1m (approximately QAR356.7m). Manateq is the leading developer and operator of specialised economic zones, logistics parks and warehousing parks in Qatar. Project completion is set for mid-2Q18.

Overall order book jumps 26% to RM2.2bn
This contract win increases the total (infra, cranes & shipyard) outstanding order book by 26% to RM2.2bn, as it bumps up the infra segment’s order book to RM1.4bn. For the other divisions, cranes’ (Favelle Favco) order book is RM698m, while shipyard’s stands at just RM48m. As the RM438m higher-margin new job forms part of our RM800m assumed job wins for FY17F, we retain our EPS FY16-18 EPS forecasts but highlight a fairly good chance of the group beating our order win assumptions this year.

Underpins upbeat stance during our Corporate Day
During the small group meetings at our Malaysian Corporate Day event last week, management sounded more upbeat than before about its job replenishment outlook in 2017. We think investors should not underestimate the prospects of its marine/infra segment (the group’s niche area) that could make a comeback this year. After securing four packages worth almost RM1bn from Petronas’s Rapid, the group has turned less upbeat about tender prospects there due to the more competitive landscape.

RM5bn value of jobs in tender
Following this contract win, management clarified that its tender book this year amounts to as much as RM5bn, almost double 2015’s figure by our estimates, and comprises largely infrastructure contracts. Also, 40% (RM2bn) of the RM5bn total value of jobs in tender comprises those related to marine infrastructure which is the group’s niche area. We understand that the remaining 40% are domestic and overseas infra contracts, including one potential southern portal package for MRT 2.

1H17 likely a period of good newsflow; Add retained In our view, 1H17 could be a period of good newsflow as the group continues to actively tender for infrastructure and marine jobs, both locally and overseas. We would not discount the group securing more packages in QEZ-3. Our target price is still pegged to a 30% RNAV discount. Key catalysts are job flows. At 9-10x CY17-18 P/E, its valuation remains attractive vs our construction average of 14-15x. Muhibbah remains our preferred small/mid-cap pick. Downside risk is lower-than-targeted order wins.