While the 1QCY16 earnings season is getting into full swing, we reckon it would be beneficial to look back and analyze the revisions to earnings estimate of FBM KLCI sectoral constituents during each of the 4 quarters in 2015

FBM KLCI
The FBM KLCI failed to impress in 2015 with a -4.1%yoy decline to close at 1,692.51 points. Along with this lackluster price performance were the persistent downward revisions in market consensus earnings estimates for the FBM KLCI 30 constituents (KLCI30). Based on our calculations, equity market analysts have cut a year-round total of -10.8% off fiscal year 2015 aggregate earnings estimates for the KLCI30. A quarterly sectoral breakdown of the revisions is as shown below: 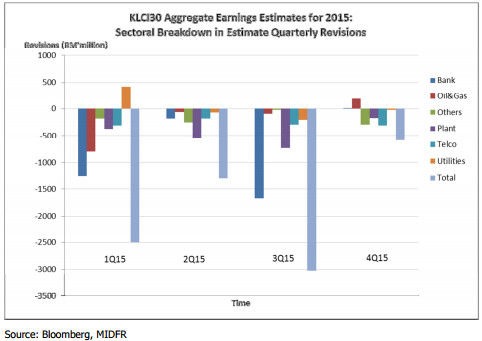 The equity market analysts have cut their estimates in every quarter, with 40.8% of the total cut took place in 3Q15. Sector-wide, Banking was the main earnings estimate dragger, accounting for 41.6% of the year-round reduction, followed by Plantation sector’s 24.8% and Telco’s 14.8%.

The quarterly sectoral contribution to the downward revisions is as shown below:

Banking: 49.8%
Banking industry contributed to 49.8% of the overall earnings estimate reduction in 1Q15. It failed to inspire equity market analysts with potential softening signs in its revenue prospects. BNM’s statistics indicated a moderating loan growth rate in Dec’14 and Jan’15 to 8.7 and 8.6%yoy respectively. The slow-down was partly driven by a softening loan approvals rate.

Banks have arguably been more cautious in granting loans against the backdrop of a relatively tight LD ratio standing at 86.7% and 87.3% in the respective month of Dec’14 and Jan’15, as well as the introduction of LCR requirement effective on 1 June 2015.

Besides that, the implementation of GST in 1 April 2015 too posed uncertainty in terms of its impacts on consumers’ spending pattern and subsequently their appetite for new loans.

Apart from the downside risk in revenue prospects, the fear of a potential squeeze in NIM also dampened market outlook for the industry. Banks’ appetite for deposits has been enlarging due to the tight LD ratio and LCR requirement.

Competition for deposits thereby has been stiff, pointing to more upward pressure on their COF. A slow-down of CASA growth to 4.0%yoy in Dec’14 further reinforced the fear of a deteriorating profit margin.

Oil & Gas: 32.1%
A total of 32.1% of the cut in earnings estimate in 1Q15 was attributed to the Oil & Gas industry. Although Brent crude oil price appeared to have stabilized during the first quarter, the industry services providers were not faring well as major oil companies were announcing plan of capex cut due to the comparatively low oil price.

As a result, their profit margins were expected to be squeezed during their contracts renewal/renegotiation. At the same time, market for oil & gas final products, such as Ethylene and Polymer, too has been suppressed due to the slowing China market, dampening the prospects for downstream players.

Plantation: 42.1%
Plantation sector continued to be the main dragger to earnings estimate cut in 2Q15 with a contribution of 42.1%. Though China’s palm oil appetite picked up significantly in April, the tailwind was offset by a more pronounced export decline of -45.7%yoy to India, its weakest demand in almost two years. Despite the fact that the total export volume in 2Q15 demonstrated year-on-year growth, the figure was discounted due to the potential oversupply condition.

Monthly crude palm oil production showed year-on-year growth in 2Q15 by virtue of higher fresh fruit bunch (FFB) yield. As a result, the supply growth has outpaced that of demand, culminating in a rapid build-up of inventory.

The closing stock for palm oil has been higher than that of its corresponding month in 2014, staying at >2mmt throughout the entire quarter. Equity market analysts arguably foresaw a suppressed CPO price, so as the sector’s earnings capacity, in the near term for the market to exhaust the excess inventory.

Others: 19.7%
Others sector accounted for 19.7% of the overall earnings estimate cut in 2Q15, with a substantial portion of the cut contributed by UMW Holdings Berhad (UMW).

UMW’s earnings projection was discounted mainly due to the headwinds in its automotive and oil & gas segments. Firstly, an elevated USD/MYR exchange rate has increased the imports costs for UMW Toyota. In addition, the recall of 97,000 units due to faulty airbags has arguably shaded its sales outlook. Although the entire costs were borne by airbags manufacturer Takata, UMW Toyota’s earnings could take an indirect hit as consumers arguably switched to other brands due to temporal loss of faith in Toyota vehicles. On the other hand, the oil & gas segment failed to inspire with charter rates remained low due to the suppressed crude oil prices.

Banking: 55.2%
Banking sector contributed to 55.2 % of the overall earnings estimate reduction in 3Q15.

Pessimism on the industry’s earnings outlook was rather intense in the third quarter, with the declining interest spread raising equity market analysts’ concern on a squeezed NIM. BNM’s statistics indicated a downward trend for banks’ interest spread since April’15. Interest spread narrowed by 13bp from May’15 through July’15, with much of the drop contributed by a declining ALR.

Meanwhile, COF was expected to experience upward pressure due to the stiff competition for deposits amid the tightening LD ratio which had increased from 86.8 to 89.3% during the aforementioned period.

In addition, the impact from GST started to take its form in the Banking industry by suppressing household’s loan appetite. Household loan growth had been soft and moderating in the post-GST economy. Consumers have arguably been more prudent in their spending pattern, culminating in a negative year-on-year growth on loan applications for vehicles and properties purchase.

Plantation: 24.5%
Plantation sector was one of the main draggers in earnings estimate cut in 3Q15 with a contribution of 24.5%.

Weaknesses in both the demand and supply side of the market have dampened equity analysts’ confidence in the industry’s earnings prospects.

The surge in global soybean supply, a close substitute to CPO, from the US, Brazil and Argentina has exerted a punch on market appetite for the CPO. This effectively lowered the price of soybean oil, dampening palm oil’s appeal to the market. China, for instance, has arguably switched its preference to soybean with a record high soybean importsat >9mmt in July. Consequently, the price of CPO tumbled to circa RM1,800/MT in 3Q15.

The situation was worsened by the lack of rebalancing response on the supply side. The production of CPO, amid the deteriorating demand, has been relatively high throughout the quarter. Consequently, inventory build-up has been robust, with CPO closing stock in both July and August overshooting market consensus estimates. Analysts thereby downgraded the industry earnings projections, arguably with the anticipation of a suppressed CPO price in order for the market to clear excess inventory.

Telco: 52.0%
Pessimism in the Telco industry emerged among equity market analysts in the fourth quarter, with the sector contributed to 52.0% of the cut in 4Q15.

Generally, equity market analysts were getting more pessimistic on the industry growth prospects with the comparatively high market saturation and intensifying competition among the main market players in Malaysia. Telco companies have been resorting to price competition by offering cheaper packages in order to expand or defend their market share. As a result, overall earnings outlook was rather uninspiring.

Others: 49.4%
A total of 49.4% of the overall earnings estimate cut in 4Q15 was attributable to Others sector, with a substantial portion of the cut contributed by UMW Holdings Berhad (UMW). Analysts continued to weigh down on UWM’s earnings outlook due to challenging macro-conditions for its automotive
and oil & gas segments. Pressure from the elevated USD/MYR exchange rate and the declining crude oil prices has been piling up throughout the year, eroding the company’s earning capacity.