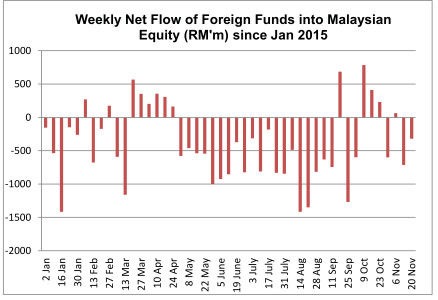 •  Foreign trade in the aftermath of Paris was ominous as expected. On Monday, foreign funds sold RM219.1m, the 52nd day this year that the defi cit
exceeded RM200m. The selling cannot be entirely attributable to Paris as sentiment leading up to the tragedy was already fragile and foreign funds were already in a selling mood. In the Friday prior, foreign funds had offl oaded a whopping RM322m.
•  Foreign selling continued on Tuesday and Wednesday but on a much slower pace. By Thursday some foreign investors were back nibbling in the market but the selling resumed on Friday albeit only RM92m.
•  For 2015, last week’s attrition increased the cumulative net foreign outfl ow to RM18.5b, compared with the RM6.9b outfl ow for the entire
2014. We estimate the overhang of foreign liquidity for money that came in since early 2010 to be less than RM10b, at only RM9.4b. In other words, foreign presence in the local equity market is currently very low.

•  We warned a few weeks ago that the market is entering a period of low activity, which is a common phenomenon in November and December. Last week, foreign participation (i.e the average daily gross volume) dropped to RM823m, and remained below the RM1b mark for the fourth consecutive week.
• Local institutions supported the market passively buying RM322m. However, participation rate dropped to RM2.16b, the lowest in seven weeks.
•  We detect edginess in the retail market as there were profit taking in some small cap stocks. However, buying support was present and that made the retail market rather vibrant. Retailers were only marginal sellers last week at RM1.9m. But participation rate surged to RM955m, the second highest in 2015!