FBM KLCI: This Week Ahead

•  The market is heading towards its worst September in three years. The KLCI had lost -1.4% for the month, as of last Friday. There could be some end-quarter window dressing in the last two trading days of 3Q14, but we do not expect much impact on the overall direction of the market. As we have expected, September has been an unpredictable month, exhibiting bias towards a broader market weakness.

Higher possibility of a green October 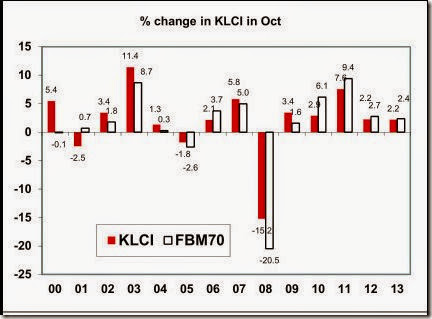 •  We cross over to 4Q14 on Wednesday. We are particularly sanguine over October. This particular month had consistently generated meaningful return
in the last five years. Indeed, since 2000, the KLCI had recorded positive returns in all, but three years. 2008 was an exceptional year when the KLCI fell
-15.2%. It was the height of the subprime crisis and arrived in the aftermath of the collapse of Lehman Brothers in mid-September 2008. 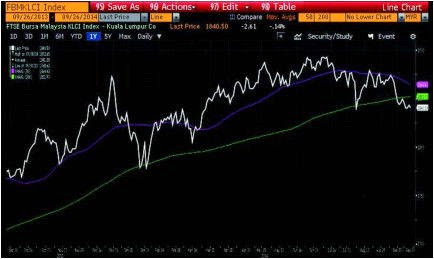 •  However, the early part of October could be challenging but is an excellent period for some serious  accumulation.  We  would  recommend investors to keep an eye on the KLCI components stocks. The KLCI is now hovering below the 200-day moving average (DMA) line, which is a long-term support indicator. We do not expect this situation to persist. After all, Budget 2015 is around the corner, and the spectre of the U.S Fed raising interest rates sooner than expected still remains a speculation at best. 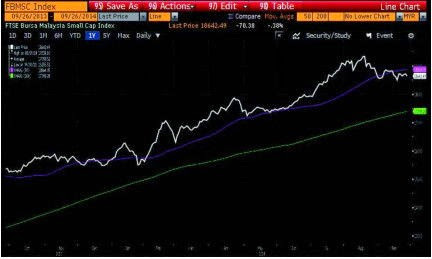 CURRENCY MISERY WEIGHING DOWN EQUITY
•  We are also crossing into October at times when the broader market fundamentals are not in favour of Malaysian equity. The ringgit was one of the weakest currencies against the greenback last week. Its weakness compared with peers widened in the last two weeks. 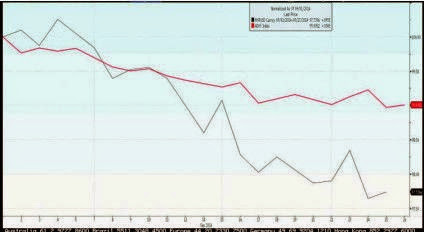 •  Budget 2015 could be a risk to the ringgit. It will probably weaken further if the Government failed to hit its target budget defi cit of 3.5% in 2014.
•  Commodity prices are also on a downtrend with crude oil price below USD95pb (WTI) due to supply overhang as a result of booming US production and a surge in Libyan exports.
•  This week is laden with statistics with the ECB also meeting on Thursday. We would remain cautious,keeping an eye for value picks.