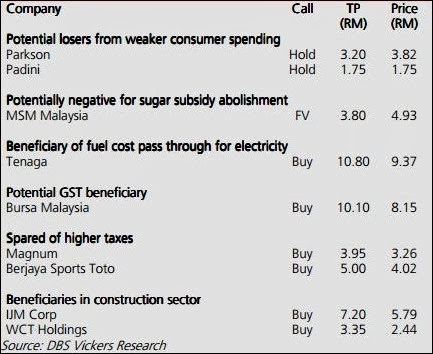 Federal Government Revenue
•  Projected to increase 2% (less than GDP growth of 5.0-5.5%) in 2014 on higher collection of corporate and individual income taxes. Petroleum income tax projected to drop 7% in 2014 on lower crude oil prices.

Federal Government Operating expenses
•  Projected to increase 1%. Only major expenses forecast to drop are subsidies (by 16%) in 2014. This is offset by increases in all other expenses. The estimated amount for subsidies of RM46.7bn in 2013 is 24% higher than the initial projection stated in last year’s economic report.

Implications/View: By sector, growth in construction is highest in 2013 and 2014 – reflecting healthy order books.

Federal Government Debt
•  Government debt projected to increase 8% y-o-y to RM541.3bn in 2013 on higher domestic debt (more investment issues and government securities).
•  As percentage of GDP, government debt increases to 54.8% in 2013 from 53.3% in 2012. The Government to ensure this ratio does not exceed 55%of GDP.

Consumer (Discretionary)
•  Though the lower subsidies and GST would be implemented together with targeted cash assistance and lower corporate and personal taxes, it may result in weaker consumer spending.

Implications/View: GENM to benefit from higher tourist arrivals and tax incentives for its RM3bn refurbishment exercise at Genting Highlands (including construction of new 1300-room hotel)


REITs
•  No change in withholding tax.
•  Promotion of tourism sector via various incentives such as Visit Malaysia Year 2014 (targeting 28m tourists), Year of Festivals 2015 and RM1.2bn for operating and development expenditure in 2013 and 2014 inclusive of promotion and advertising.

Telecoms
•  Implementing the second phase of the High Speed Broadband (HSBB) project in collaboration with the private sector at an investment cost of RM1.8bn, which is expected to benefit 2.8m households nationwide, while internet speeds will be increased 10 Mbps.
•  The HSBB network will be expanded to suburban areaswith internet access speed increasing to 4-10 Mbps, which is expected to benefit 2m consumers at RM1.6bn cost.
•  Increasing internet coverage in rural areas via construction of 1,000 telecommunication transmission towers over 2013-2016 at an investment cost of RM1.5bn.
•  New underwater cables will also be laid within 3 years for RM850m to increase internet access in Sabah and Sarawak.

Implications/View: Telekom Malaysia would be the most likely partner for HSBB network expansion, would translate to wider potential subscriber base but cautious on investment cost mix

Plantation
•  Government will continue its initiatives to encourage the agriculture sector in Malaysia. The Government will allocate a sum of RM2.4bn for subsidies and incentives which includes subsidies for fertilisers and seeds.
•  Also, RM243m will be allocated for the replanting programme of palm oil, cocoa and rubber as well as forest plantation programme.

Implications/View: Potential domestic volume risk for BAT (Hold), JTI (NR) as consumers may continue to be impacted by inflationary pressure