- For the property sector, the Budget may include measures to curb speculation. The Real Property Gains Tax (RPGT) may revert to the original 5-30% for disposal within five years

Tapering delay lifts KLCI. The benchmark KLCI gained 3.6% in September – recouping most of the losses suffered in August – driven by improved investor sentiment following the US Fed’s decision to delay QE tapering. The Ringgit also rebounded along with other Emerging Market currencies that were sold down in August. The KLCI lagged the MSCI APxJ’s 7.9% gain in September, given the former’s relatively shallow drop in the previous month. YTD, the KLCI is up 6.9% versus the MSCI’s 0.7% gain. 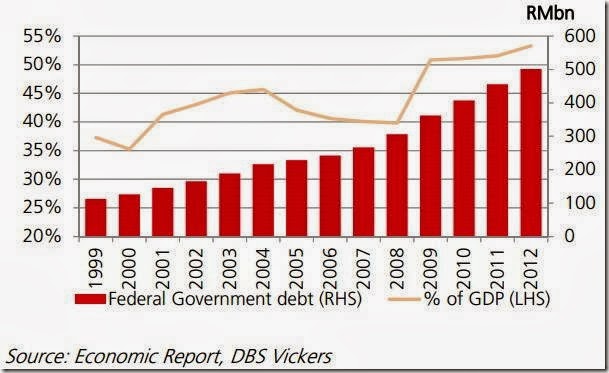 Reducing fiscal deficit. With the Government intent on reducing the fiscal deficit, we expect it to announce further cuts in subsidies in Budget 2014 that will be tabled in Parliament on 25 October. The Government raised petrol prices by 20 sen/litre on 3 September, which will reduce fuel subsidy by RM1.1bn in 2013. Despite this, the Government is still subsidising about 60 sen per litre of petrol. The fuel subsidy amounts to RM24.8bn in 2013 (estimated 12% of Government expenditure). In addition, the Goods & Services Tax (GST) may be announced in the Budget.

Developers which are susceptible to tightening measures are those with: a) large exposure to high-rise developments and investors: Mah Sing (Not Rated), Tropicana (NR), YTL Land (Buy); and b) large percentage of foreign buyers: UEM Land (Hold).

Higher inflation. Although the measures will help to improve Malaysia’s fiscal position, it will also result in higher inflation. Weaker spending could hurt consumer players such as Padini (Hold), Parkson (Hold) and BAT (Hold).An electricity cost pass-through mechanism will be positive for Tenaga (Buy).

Rescheduling projects. In an attempt to rein in the increase in Federal Government debt and improve the current account position, government projects may be rescheduled with emphasis on low-import content and high multiplier projects. Petronas' RAPID project has been delayed and commissioning is now expected in 2018 instead of 2016. Dialog (Hold) could be affected as Pengerang deepwater terminal phase 2 is meant to service storage demand by RAPID clients. Other oil & gas upstream projects such as marginal fields and new exploration & production activities may be slowed down but to a lesser extent due to the need to increase Malaysia’s oil production.