MALAYSIA
•     In this report last week, we warned that foreign investors were getting edgy as the amount of net buy was shrinking. True enough, foreign funds sold Malaysian equity in the open market (i.e excluding    off-market deals) last week  amounted  to -RM629.5m. That  was the first sell down after  a record 24 weeks of non-stop buying.
•     Foreign investors sold every single day last week. The volume of the sell down hit a peak on Thursday, hitting -RM232m. That was the highest 1-day sell down since 28 June 2012.
•     Despite the selling last week, the overhang of foreign liquidity remained uncomfortably. So far this year, foreign investors have bought +RM18.1b or +USD5.9b net of Malaysian equity in the open market compared with +RM13.7b (+USD4.5b) in 2012.
•     Foreign participation rate (average daily gross purchase and sale), which was already elevated, surged further to RM1.5b per day last week, compared with RM1.2b in the previous week.
•     The local retail market quickly turned cautious last week and there was moderate withdrawal from active participation. However, risk aversion was much higher in the week prior to the General Election. Last week,  retailers offloaded  only -RM3.7m. Participation rate fell  to RM1.4b from RM1.8b, which was still considered elevated. We believe the retail interests will sustain if the market’s correction expected this week is not severe. As we had written last week, local retailers are sitting  on sizeable  cash,  having  sold -RM6.0b  this year, already exceeding  the  -RM4.2b  offloaded in the entire 2012.
•     Activity on Bursa is currently dominated by local funds which supported the market heavily last week.   Local    institutional    funds    bought  +RM633.2m,  the first  buying in 14 weeks. The participation rate  was RM2.4b, and the figure  had exceeded RM2b in the last  5 weeks. Local funds remained flushed with  liquidity,   having  sold  their    equity holdings by  a massive  -RM12.1b   net  in   the  open market this year, compared with -RM9.5b sold down in 2012. 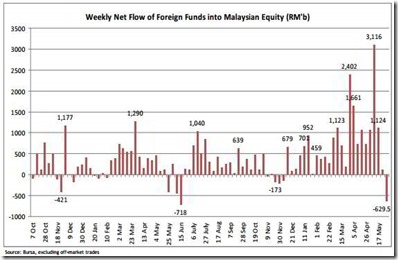 THE WEEK AHEAD
JUNE BECKONS
•     The    final    score    in    the    month    when    the    general election was held is a revelation indeed. After exploding promisingly the day after the election, the    KLCI    fizzled    out    to    record    a    gain    of    only    3.0% in May, the second best May in 5 years. The real winner was the FBM70 index, which shot up 12.7% during the month, the best performance in May since 2000
•     It is clear that the wider market has “awakened”. The retail market is active with plenty of actions among the small and mid cap stocks. Volume in May hit a whopping 47.8b units, 101%yoy higher. This is a healthy development for the market as wider participation adds depth and will help sustain trading interests.