MIDFR vis-à-vis the Consensus  KLCI: 1,614.14
More sanguine than the street 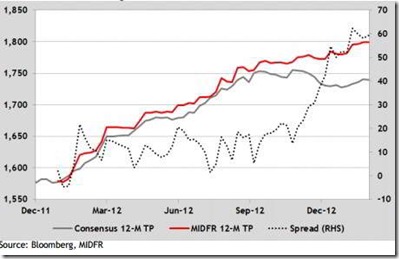 During the same period, on the other hand, MIDFR’s 12-month bottom-up target for FBM KLCI continued to rise from 1,768 to 1,798 points. Accordingly, the spread between MIDFR’s against the consensus’ 12-month bottom-up FBM KLCI target widened from the past average of +10 to around +60 points. FBM KLCI 12-Month Target Points

Coherent upward trending bottom-up outlook among major and regional indices. The 12-month consensus bottom-up target points for most major as well as regional indices experienced their last hiccups circa mid-2012 pursuant to the “Grexit” scare. Nonetheless, ever since, encouraged by continued signs of improving world’s economy and buoyed by hitherto ample financial liquidity, the consensus target points of these indices are now decidedly upward trending. The 12-month bottom-up targets for Dow Jones, Frankfurt’s DAX, Jakarta’s JCI and Bangkok’s SET indices are up to 10% higher than their spot levels. 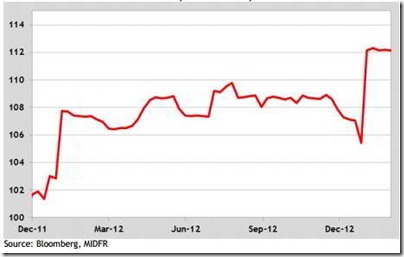 Valuation pullback engendered by election risk. The recent retracement in consensus target point was unique to Malaysia as opposed to the rising tide in other major and regional markets. Due to that fact, we can safely conclude that the pullback in FBM KLCI consensus valuation multiple was precipitated by domestic-related issue. Hence, we reckon heightened uncertainty over the impending 13th general election (GE13) may have contributed to the recent contraction in consensus valuation multiple.

We reiterate our view that investors may have over emphasized the election consequence.We view that the likeliest of result is that the status quo would remain pursuant to the GE13. Consequently, we are sanguine that the consensus valuation multiple will henceforth revert to the prior higher levels. Thus, this presents an opportunity to investors with the risk tolerance and who shares the similar view. Furthermore, as explained in our earlier report, while the local market performance may temporarily decouple from the rest of the region, based on empirical behaviour, it would soon re-track the broad regional trend direction. Hence, we reaffirm our FBM KLCI 2013 year-end top-down target of 1,750 points