• Whatever said about the precipitous fall of the KLCI last week, investors can be comforted to know that foreign funds were still net buyers, at least in the open market, of Malaysian equity last week.
Foreign investors remained net buyers of Malaysia equity for the seventh week in a row, albeit marginally. On a net basis, foreigninvestors BOUGHT +RM27.6m in the open market, compared with +RM952.2m the week before (see chart below).
• This revelation is hardly surprising amidst the strong tide of global liquidity that is currently washing ashore Asian Emerging markets. The amount of foreign money that found its way to Thailand, Indonesia, India and the Philippines last week was remarkable.
• Foreign funds were only marginal net sellers on 3 out of 4 trading days last week. They were buying on weakness on Tuesday, the second day of the selloff, indicating that foreign fund managers find value in Bursa when the KLCI is at around the 1620 mark. For the year until last Friday, foreign investors have bought +RM2.09b of Malaysian equity. In 2012, they bought +RM13.7b.
• We believe the initial selloff on Monday was triggered and exacerbated by speculative retailers as their participation rate (gross purchase and sale) surged to RM1.13b on the day, the first time it exceeded the mark since October. Local retailers were net sellers throughout the week, offloading
-RM203.6m, the highest in a week since September. This, we believe, was also attributable to momentum selling from the week before. Foreign investors were not aggressively selling on Monday and effectively squared their position on the day. They were back buying on Tuesday.
• Local institutions were clearly in the market to support prices. Participation rate (average daily gross purchase and sale) surged to RM2.18b, the highest since August 2012. Local institutions mopped up net +RM176m last week, the fi rst buying in seven weeks. 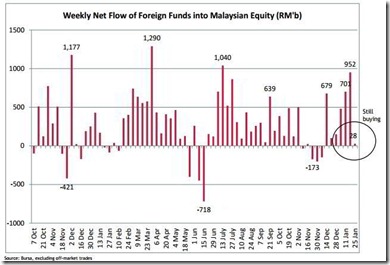 SHORT WEEK, THE DUST HAS SETTLED
• It will be only a 3-day trading week (Federal Territory day  is on Friday). We do not expect another bout of market meltdown similar to that experienced on Monday last week. The dust has settled. After all, any speculation about the General Election has become stale in our opinion, for the time being. Whenever it is, we do not expect any announcement before the Chinese New Year (10-11 February).
• The fl ow-of-fund trend is currently favouring Emerging Asia. With the KLCI glaringly lagging all peers, it would be a diffi cult market to ignore, especially considering the fact that fundamentals have hardly changed in the first month of the year.
• If foreign buying were to pick-up pace again this week, the irony would be that (we expect) local institutions will be quick to offl oad again. We are in the early part of the year when the demand and urge to realize profit is still strong. This will have the effect of dampening any rise in price. We could therefore be back to square one.
• As of last Friday, the KLCI had lost -3.1% in January, worse than the average decline of -0.9%, in the same month, in the last 5 years (see chart). The FBM70 shed -1.0%. After the drama last week, it could be a dull week ahead